DEX.EXEYour Source For Games
HomeArticlesGames We Love That Changed Up The Way They Are Played
ArticlesTeam Talks

Games We Love That Changed Up The Way They Are Played 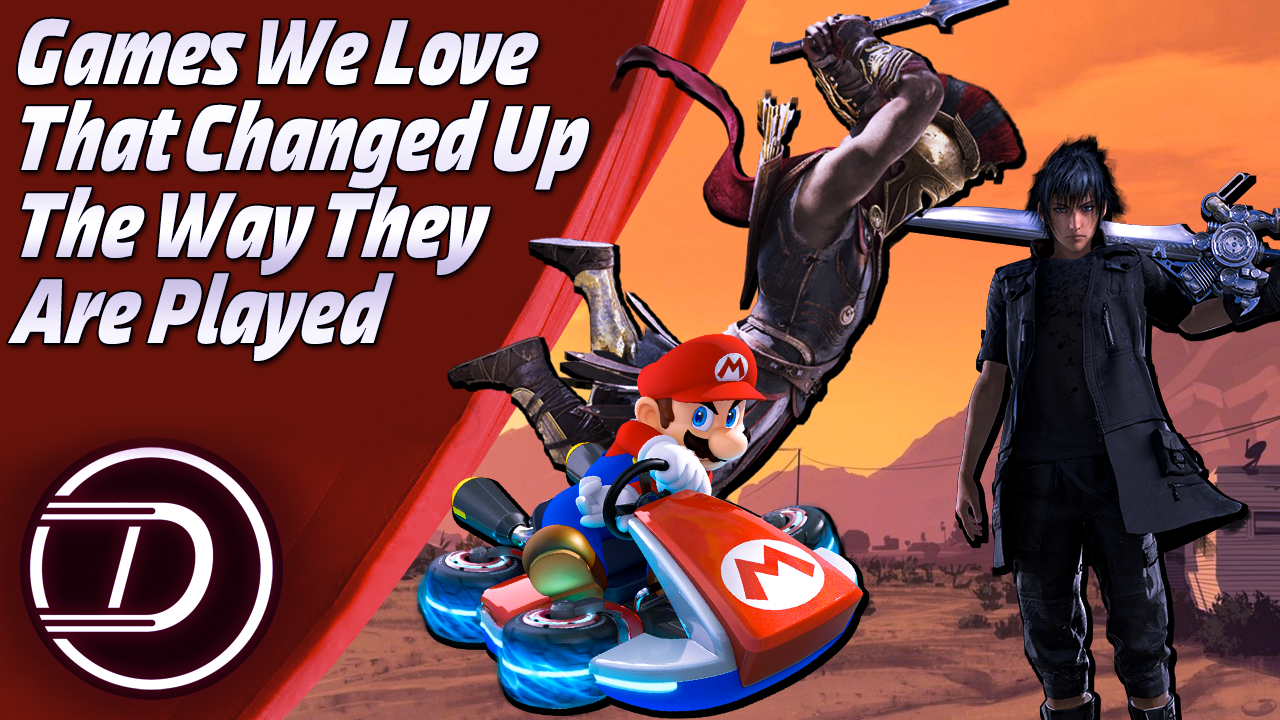 Welcome to Team Tuesday. Here we look at a recent or upcoming game and talk about something related to that game. Last week we saw the release of Darksiders Genesis and that game was totally different than the other games in the series. This made us think about some of our favorite games that ripped up their rulebook and change the way they are played.

Final Fantasy is one of the longest game franchises to be running. Hironobu Sakaguchi created a little JRPG, that blossomed into the Colossus of a series that it is today. This series has seen so many spin-offs and remasters and ports, than any other franchise. So many different gameplay mechanics, or styles of games.

Some people think it’s too much. Others just want the basic turn-based RPG it used to be. I’m a little more on the fence. When it comes to the mainline series, 1-15, we’ve seen a few takes. Turn-based, two MMOs, and just recently, a hack and slash. This is all great to see, and I love seeing new ideas, yet at the same time, I feel some things are lost. Yes, Final Fantasy 15 was good, but I didn’t want an Open-World RPG in the vein of a western RPG. Yet at the same time, I loved the shakeup. Some say the series changed for the better, some say the worst, and me? I don’t know what I say. It’s a hard decision for me. But if we look into the grand scale of every Final Fantasy, since the first one, we get a bigger picture. You have rhythm games, strategy games, MMOs, mystery dungeon games. Sure it’s not as wild as say Mario, but it’s still amazing.

In the grand scope of the ENTIRE Final Fantasy series, I’d say it changed for the better. We have so much variety from it all, and that makes me happy. But mainline titles, as I said, I’m not sure where I fall. It may sound kind of contradictory, but when it comes to such grand scales, it’s hard to not feel contradictory.

A game I absolutely love and that has changed from its original few games is, of course, Assassin’s creed odyssey. I talk about this game so much already. This game is legitimately one of my favorite games of all time. I love the old format, but since a few years ago I really started to like the big open-world RPG games, and this just really fell in my lap when I wanted it most. Origins was also a bit like this one but Odyssey really improved on it and made it almost perfect.

It pains me to say this as the original version of the franchise was one of my favorite games ever made, but what they have done with Mario Kart is one of the biggest failings by a games company in my opinion.

Super Mario Kart for the SNES was one of the biggest games of a generation. There were hours of fun to be had in both single and multiplayer. I remember mastering her corner slide with Bowser & Donkey Kong whilst remaining within the course restraints for hours upon hours.

For me, Mario Kart 64 tried so hard to emulate the original but just did not the same feel. It tried too hard to move with the times and improve on graphics and just forgot the gameplay and fun factor that made the original such a success. There has been a downward spiral for this franchise ever since with the 11 iterations of the franchise that followed. None have got close to what was a truly outstanding game.

Where we are with the most recent release feels me with deep sadness and the fact that it was only released on a mobile platform angers me even more. Mario Kart and the Switch are perfect for each other. Why Nintendo, why?!

One of the videogames I’m following since I was a kid it’s Guitar Hero. I remember when back in the years there was only the guitar as a playable instrument. Then the microphone and drums come to the game… That was a revolution that made it possible to play online and form a virtual band too. I was really amazed about this change of formula as it increased a lot the way to have fun with friends and new ways to enjoy Guitar Hero.