Games That Got Us Into Trophy Hunting 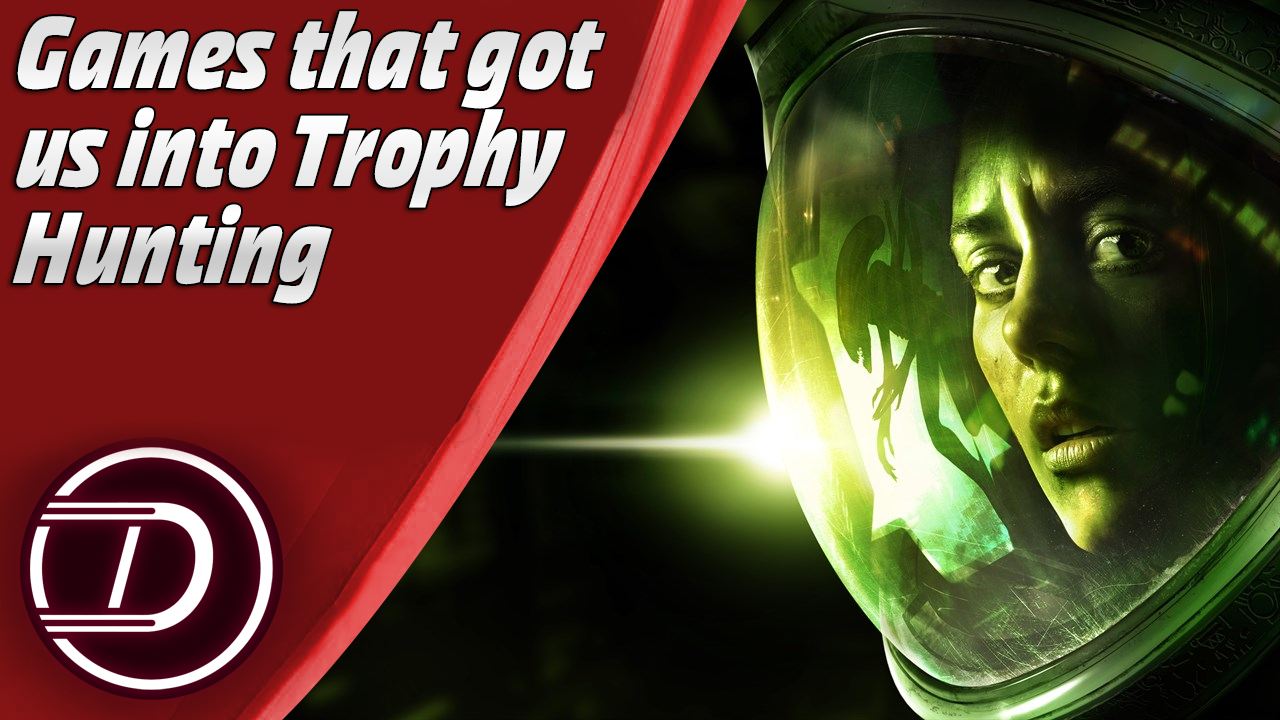 Welcome back to another team talk, where we share some stories, good and bad, and share our deepest and darkest gaming secrets (sometimes at least). This week we are going to talk about something most of our readers do, and that’s trophy hunting. So let’s take a deep dive into our trophy hunting origin story, so what are the Games That Got Us Into Trophy Hunting?

One of my first memories that started my love for trophies, was whilst playing the awesome survival horror game, Alien: Isolation. My PSNP stats say it was my 10th ever platinum, back in 2017. (Scooch forward 4 years and I’m now on 930 platinums!! So it’s safe to say the seed of a trophy addiction was born!)

So I bloody loved Alien Isolation. I am ofc a huge fan of the film franchise, and I was instantly in love with this game when I played it feeling like l was inside of the films, feeling first hand that fear and tension, every move I make mattering towards if I would survive. The atmosphere of the game was perfect. After completing the game, I didn’t want it to end… And it is trophies that gave me that reason to play it again. I wasn’t too familiar with trophies but I looked it up and it said the game challenged me to complete it on the hardest difficulty. I thought alright I’ll give it a shot! What I learned is there is something exhilarating about a good gaming challenge. After some sweats, shakes, and adrenaline, I beat it. You get such a huge rush of satisfaction and accomplishment, all these extra feels from a game simply because of completing the requirements to a hard trophy. The game then upped a gear and said hey, you think you can complete this whole game without even dying once? Oof, are you insane.. Alright.. Let’s see if I can do this. It is this challenging factor that trophies add, letting you experience and enjoy even more depths of your videogames, stretching your abilities to achieve amazing things you weren’t sure if you could do, but when you do.. Boy does it feel GOOD.

In summary, my love for trophies is for the challenging trophies/platinums/games. They bring me utter sheer joy. I won’t say much about the other ‘easy platinums’ yea I play them just for something to do but I don’t feel anything from them. They have no meaning to me. Whereas on the other hand I will never forget every hard horror game that I have proudfully slayed. :metal:

Oh dear, this is taking me back some years, despite the fact that I was a little late onto the Trophy Hunting scene.
I honestly had no idea what it was all about until a friend of mine back in the day told me that he almost had 1,000 trophies… I was like OMG, What the hell are they? What do they do?

Well, that when he introduced me to the classic that is WWE Legends Of WrestleMania! (Check the history books, it’s a good en’). Not only was it a fun game, but the Platinum at the time was a nice quick one with less than 4 hours needed for all the trophies…. Can you imagine that now!?

If you still own a PS3, and you’ve got the drive to play a fun game then I can highly recommend this! Even watching the below gave me chills.

Trophies are a great little thing to do for some people. Others find them pointless. I never enjoyed the achievement points on Xbox, but for some reason, trophies really dug their claws into me, and haven’t let go since. But do you remember what got you into gaining trophies?

It was 2010 for me, and the game that took up 90% of my time was Call Of Duty Modern Warfare 2. I loved it so much I got good enough to beat it on Veteran. Then me and a friend decided, “hey, let’s do all the spec ops missions on Veteran too!”. When that platinum popped we both went “awwww yeaaa!”, and then we proceeded to race to see what would platinum Uncharted 1 first. Then it was all downhill from there. Or uphill depending on how you look at it! So it was a mix of MW2 and Uncharted 1 that really got me into the lifestyle of hunting, and I wouldn’t want it any other way honestly!

For me the journey didn’t start for real until I tipped my toes into the amazing game called God of War, you would think that it’s for the classics but no, I never even played that until God Of War 2018. That game was a fairly easy platinum, and for some reason, it just drew me in. I played it on day 1 for about an hour and tossed it aside as a boring game, but a week later I decided to pick it up and ended up loving it.

Somewhere nearing the end I found some guides and decided, why not platinum this, and I did. That’s where the ball started rolling and spiraled into the thing it is now. Back then I wanted to do every game I own but now? I just platinum the games that seem enjoyable. I’ve burned my hands too much on games I just hate and having it stuck on my list (Looking at you Dark Souls 2!). So yeah, I’ve not been in the Trophy Hunt “game” for long at all, but I feel like I’ve already met so many amazing people (, and sadly some of the worst people). But the good people make everything worth it.