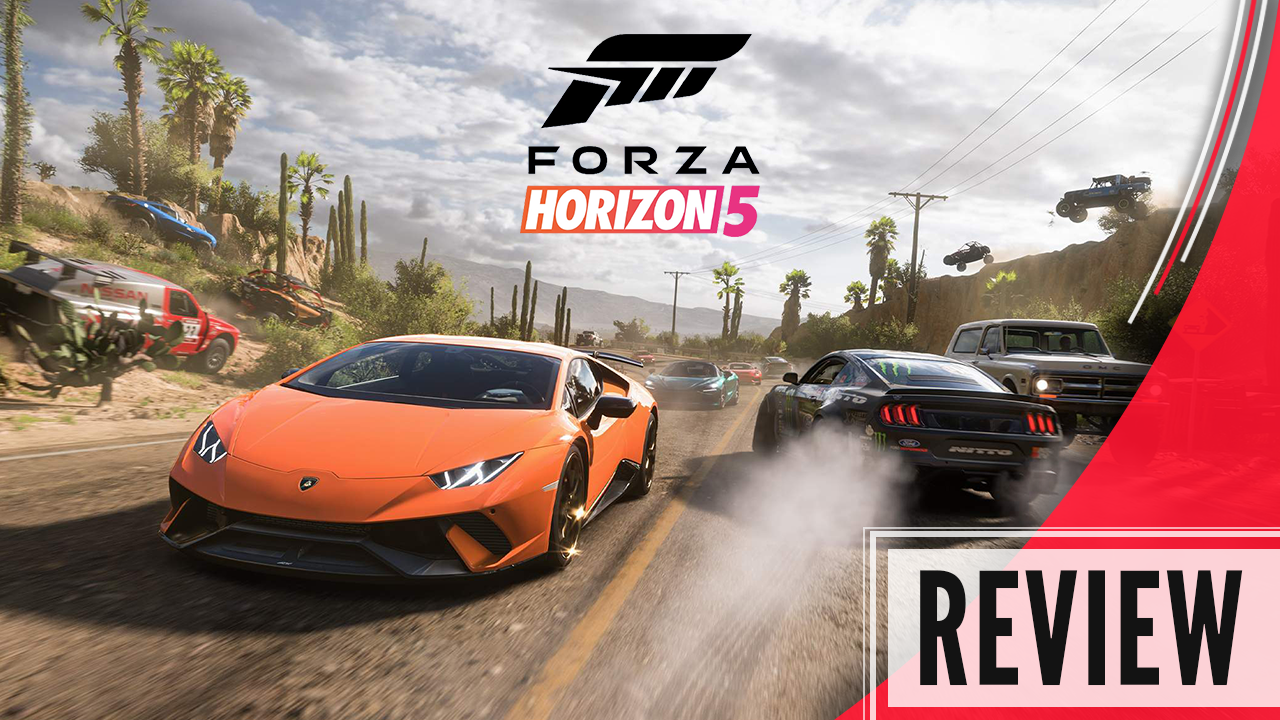 Forza Horizon 5 is a racing video game that came out for the Xbox One and Xbox Series consoles and for PC on November 9, 2021. The game is developed by Playground Games and published by Xbox Game Studios. We want to that Xbox for giving us an early copy of the game.

So I wanna start off by saying that by no means I am a race game fan or am good at games like this at all, but this game feels really different from regular race games to me because I truly loved all 40 hours that I put into it while never really feeling bored at all. There is just so much to do in the game and so many different types of things that the game feels fresh with everything you do.

There are a lot of good things but I kinda wanna get the 1 major bad thing out of the way first, the map. The map of the game should be in Mexico, but most of the map does not feel like it at all but feels more like I drove around in Forza Horizon 4 again, while that is not a big thing it does kinda feel like I was playing an older game in the series. But the parts that do look different are really cool, there are some jungles, Mayan temples, and a desert you can drive through.

The Visuals of the game look amazing with almost no real flaws that I have seen other than some minor glitches here and there where I was in some cutscenes not everything was loaded in and where I was flying in those cutscenes. Every area has something that makes it stand out, there are beautiful and colorful cities, plain lands filled with cacti, and a desert to cross around.

There are a ton of different types of game modes to enjoy in the base solo game and a massive map to explore, after doing all the races, stories, and getting most of the collectibles I would for sure say that the game is worth its price tag for that alone. There are a few different types of races that all use different cars as well, and because they are all scattered around the map it just never gets boring.

Sadly the online has not been working for the past week, but it looks like it’s a copy-paste of the modes of Forza Horizon 4. I wanted to play the battle royale but I have been unable to connect to it and with the base races that I did sometimes connect to I sadly ended up matching with hackers every match that just instantly won the race. I hope this is only a temporary thing because otherwise, I would stay away from the online mode.

The unlockables in the game are pretty easy to get early on but when you are searching for a specific car or need a ton of money it could get a bit annoying, but you could of course AFK grind or do some glitches and take advantage of the system for easy wheelspin, I found a cheap car that gives you a super spin for only 5 skill points, but even then I still could sadly not found 1 specific car I needed. So while there is a lot to get, it’s a bit hard to get specific things randomly and some cost a ton of money.

The cars are super easy to control, even for someone with no race game experience, that is for me at least a massive plus point, and even if you do need some extra help there is an auto brake and steering to help you go to the right direction. while I watched an AFK grind it even taught me some things about how to better take corners and better braking points. so I would recommend doing a short AFK grind and watch.

Sadly the main story and the cutscenes of the game are a bit lackluster, while the story is still fun, the cutscenes themselves are just people standing next to a car moving their hands, and their mouths don’t even move. This doesn’t really break the illusion but I would have liked to have some improvement on this front.

The sound of the game is perfect, cars have different noises on different parts of the map and you just get pulled into the whole experience. The music of the game really fits the game as well, it’s not distracting and on the back but when you hear a song you like/know you just hyped up straight away without it being a distraction.

As race games go, this is the game every developer should strive to make, a perfect balance between open-world exploring, epic scripted races, and just great regular races as well. The game will give you a ton of hours of fun without any boredom. With a ton of cars and areas to explore, there is something for every type of gamer to do. Want to just try it out? it’s FREE on gamepass!