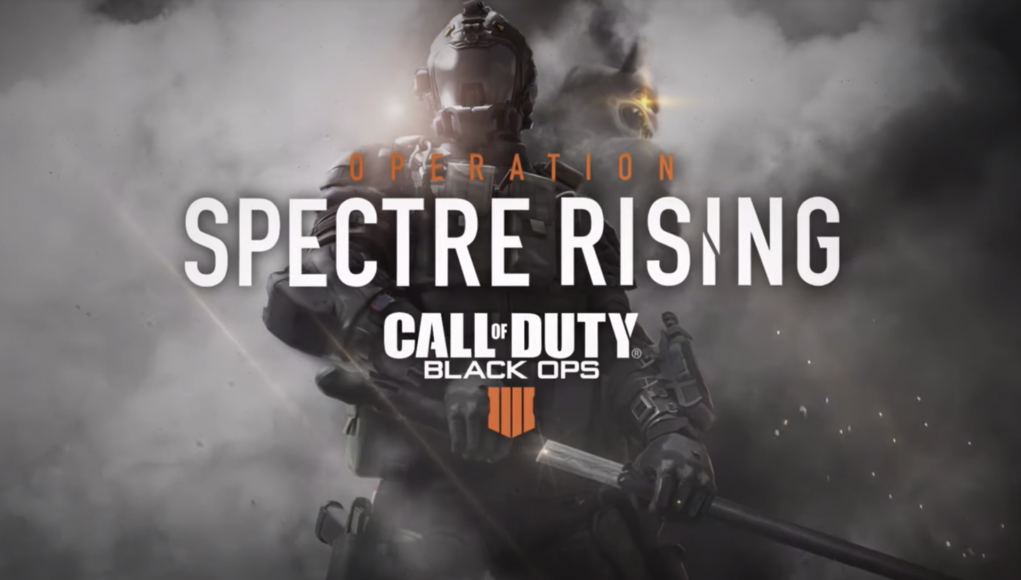 Yesterday Treyarch held a live stream event where they revealed a lot of new info about whats to come over the next few months in Black Ops 4.

The first thing that they revealed is the new operation called “Spectre Rising”, as the name already say’s Spectre from Black Ops 3 is returning as a specialist in Black Ops 4. This new operation is available NOW on PS4 and May 7th on Xbox One and PC.

Here is everything this Operation has to offer: 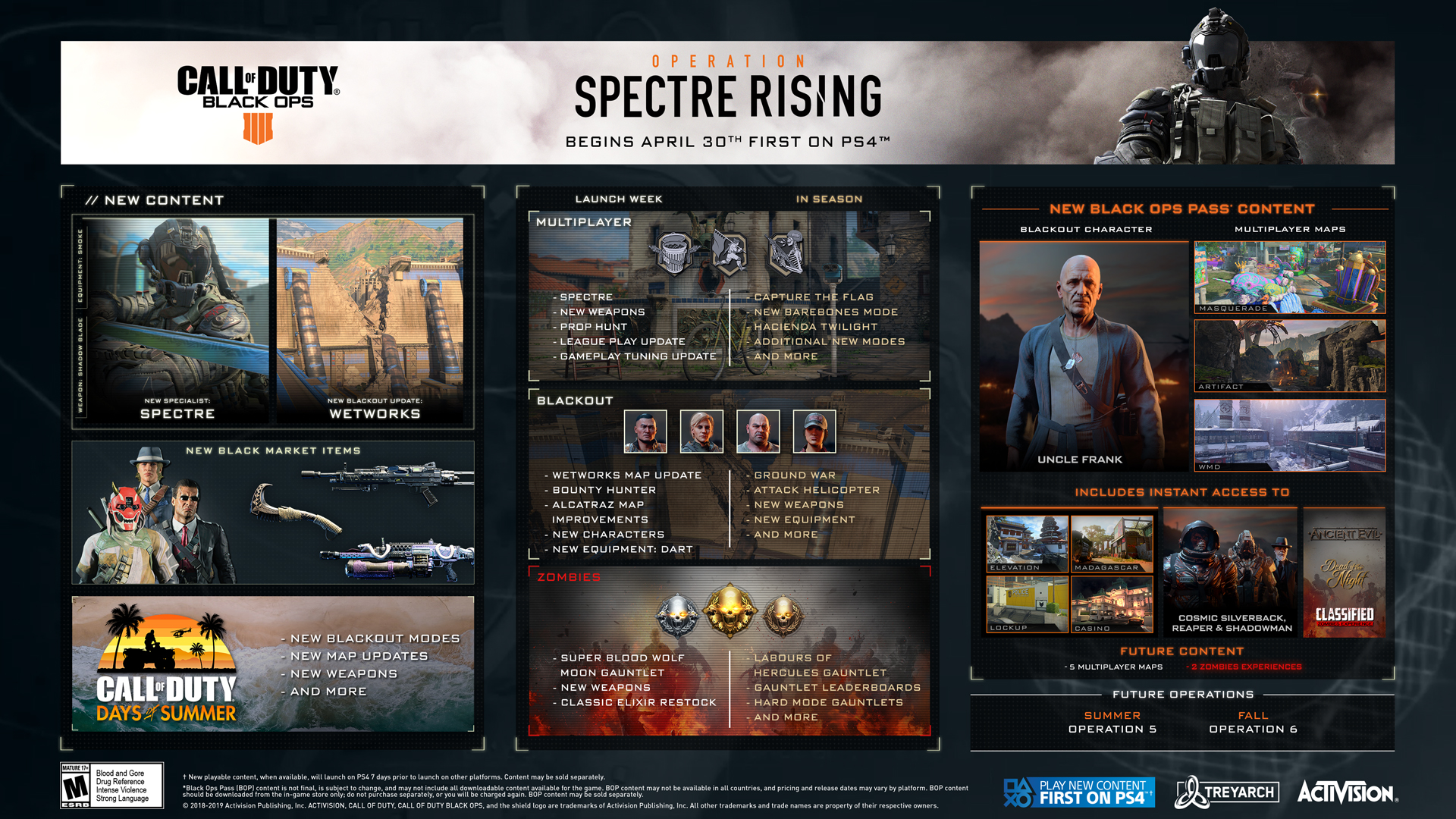 The first thing you see is banner of the operation is the “new” specialist, its none other then Spectre from Black Ops 3. This time he will not get the invisible skill but a smoke equipment but his weapon, The Shadow Blade, will be returning. You will unlock him when you get to Tier 1 in the Black Market. Spectre will also be playable in Blackout.

The next new thing that come’s with the update are 3 maps. the first map is Masquerade.
Masquerade: Weave through the bright and chaotic alleyways of a claustrophobic city market as you’re caught in the middle of an embassy under siege. Using a happy aquatic festival as cover, elite assassins have hijacked the parade floats, using them as battering rams in an attempt to breach an adjacent U.S. embassy.

The next map is called Artifact.
Artifact: This large and full-terrain platform map features rock outcrops, deadly thermal geysers, slippery slopes, and ice caverns to explore. In the remote landscape of Iceland, hired treasure hunters have tracked down and unearthed an ancient zombie artifact. Unfortunately for them, they aren’t the only ones that want it.

And the last map is a return of the existing map WMD from Black Ops 1.
WMD: Returning from Black Ops, this map features a mix of interior and exterior engagements, with a variety of catwalks, pipework, and ladders resulting in combat from every angle and range. On WMD, you are deep within the snowy Russia borders where a covert laboratory has spun up production of weaponized Nova 6 chemicals.

The next thing coming to the multiplayer is the game mode Prop Hunt, that will be arriving on friday (May 5th).

Blackout just got his main map update called Wetworks.
Main Blackout Map: The Wetworks Map Update following the Dam explosion transforms areas of the main Blackout map along the river. Factory, Rivertown, Cargo Docks, and the farm near Firing Range have all suffered damage and flooding, resulting in dramatically different terrain downstream from the detonation. This means new strategic plans are needed when investigating or defending these areas. The Tactical Raft and PBR can become a great deal more important as you tactically maneuver through these waterlogged locations!

If you own the Blackout pass you wil also get a new character
Uncle Frank: The retired Vietnam War veteran from Black Ops 2 is now a playable Blackout character.

There is also a new game mode called Bounty Hunter
Bounty Hunter: In this fun and frantic new Blackout game mode on the original map, you’re tasked with racing to find one of Spectre’s  Shadow Blades, which are marked with a beam of light. Find one, and you transform into Spectre!

There will also be a special edition of the game available on the digital stores and is called Call of Duty Black Ops 4 – Spectre Rising Edition, the edition will cost 59,99€ but is on sale from today untill may 7th for 38,99€.

This edition will include the following items:

If you already own the game you can get a starter pack bundle that will include: a Rare Spectre outfit, a ‘Retro Game Art’ jump pack, and five Reserve crates.