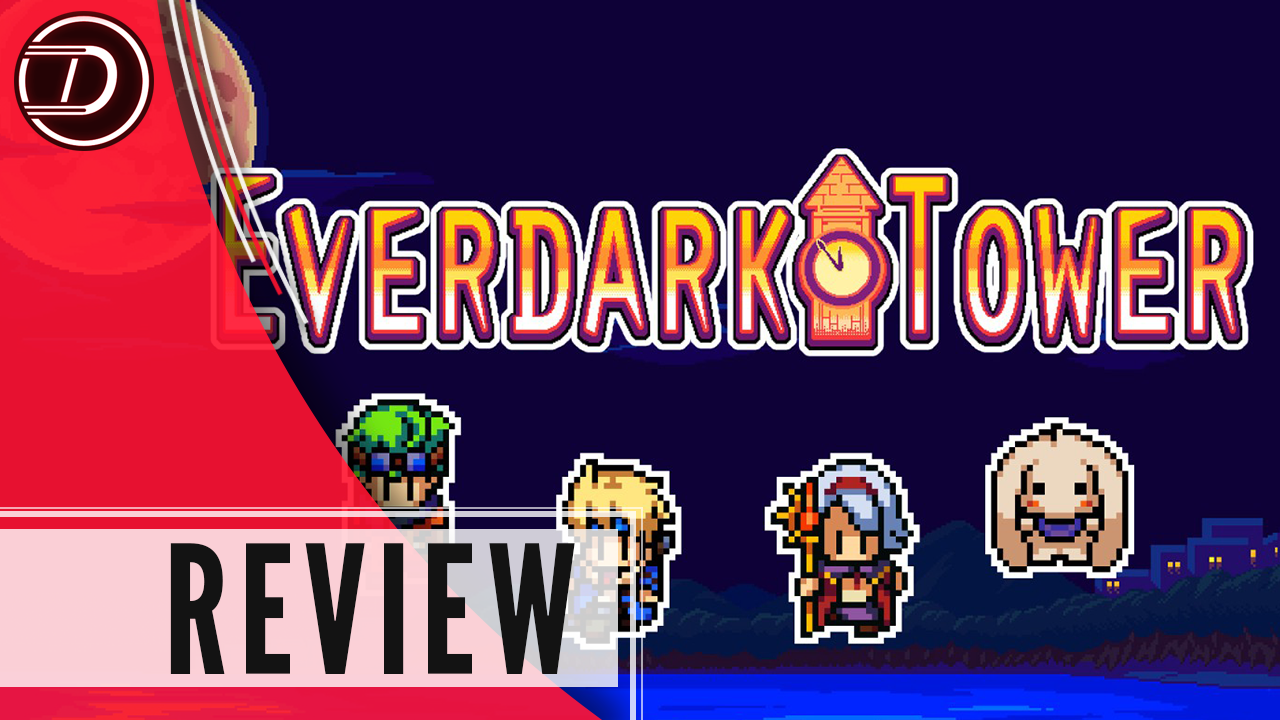 EverDark Tower is a JRPG from Kemco. It’s a bite size game that game be completed in just a couple of hours! Perfect for people who want that JRPG experience, but don’t have the time for them.

Time has stopped moving. With that revelation, it means night can no longer turn to day. Monsters lurk the fields, and they’ve become increasingly more violent. Albus, or whatever you want to name him, has dreams, of a girl in a clock tower. “Make time move again.” What could that mean? Time to figure out and save a girl in the meantime!

This game is a short and sweet JRPG. Nothing too big and fancy, but that also means, there’s not much here, and not much to see or do, or even talk about. There’s no character building. The story is basic and flat, and it’s over before any real JRPG begins. Don’t expect any heart-filled moments, or to laugh, or literally ANY character building!

In typical JRPG fashion, the gameplay is simple, and obvious. The battles are from random encounters. The game is turn-based. You select your move, attack the enemy, they select theirs, and attack you. Now, a lot of turn-based games have some depth. This doesn’t. You get one selection per turn. Need to heal? There’s your turn. Need to cure a status ailment? There’s your turn. Early on in the game, you get a healing ability that makes buying healing items pointless. Start a battle, then heal, then kill the enemy without taking any damage. Easy and simple. Eventually though, all the battles turn into the same 2 moves to win and gets tiresome.

Now the world is empty. You visit two towns and three dungeons. But least the dungeons have puzzles! Unfortunately, it’s basically the same puzzle. Step on the lights from point A to B. There are no side quests in the town’s. No nice NPC dialogue, and only one Inn, and that’s in the second town. Not sure where to go? The game will show you. It prides itself on being a bite-sized game. Which is okay for some, but not for others.

In the game, you get stars. These stars are gained from picking them up, or waiting 30 minutes in-game to get one. ONE! These stars are used for everything. Want to open that chest? Use a star. Want to make your next attack a critical hit? Star. Want 2x EXP from a fight? Star! Mind, you that’s the best use for this. That, and being able to revive in the middle of a fight with full health, without restarting. The worst part of them though? You NEED them to get through doors. STORY LOCKED DOORS! Used all your stars to get extra EXP or do critical attacks and need to get through that door? You’re waiting a long time. It’s a cool system, but has that big drawback.

Now this thing this game does well is its graphics. It looks like a 16-bit JRPG. It’s not too large, so it does look really great on handling everything. Nothing looks bad, or runs terribly. It’s all smooth and sleek. Now I love the era of games this is making an homage too, so the way the game looked to me? I loved it. Too bad you only get about 3 chiptunes to go along with everything. I don’t want your calm town music in the last dungeon that’s supposed to be epic!

I mean, there’s nothing here. The one reason why you’d replay this game again, is if you’re giving it to someone as “My First JRPG”. If you’ve already beaten it, you can let them fly through it on NG+. So that’s nice. No party members to mix and match. No side quests to do. No post-game dungeon. No rewards. Nothing!

I would get this game on sale. As a JRPG nut, I enjoyed the little bite-size game that it was. But I wanted more. At least a nice elegant story. It doesn’t have to be big and amazing, but at least hook the player in. The game was simple. I never felt like I was freaking out about how to survive, because the stars were always there as a safety net. It was all over before it started too. The least they could’ve done too, is add some more music to it. There’s like, 6 areas! Why couldn’t they all have their own music to go along with them? I enjoyed it for what it was, and I’d certainly let someone play it who wants to dip their toe in the genre. But I’ll certainly never be playing it again. I also wouldn’t recommend it for more than a buck or two either.