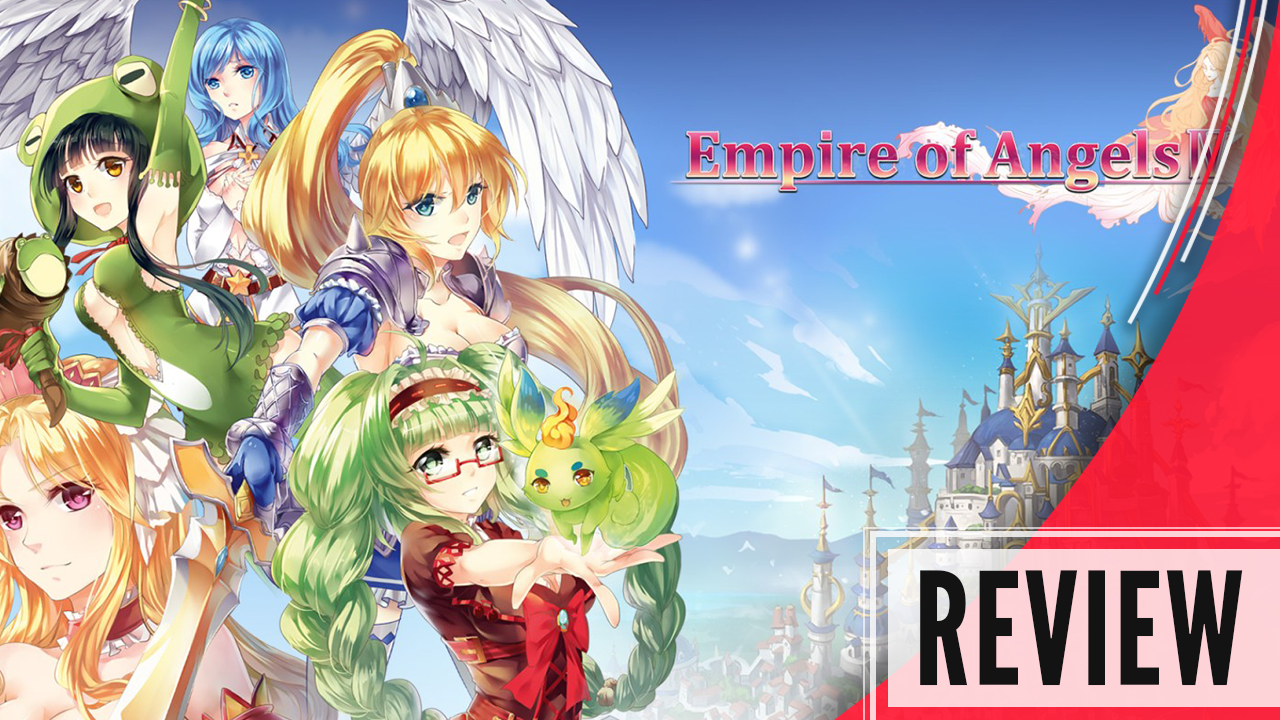 Empire Of Angels IV was created by Softstar and was originally released for PC and Mobile in 2016. But EastAsiaSoft is bringing it to home consoles in 2021!

*Disclaimer: This review may contain slight spoilers. A code was provided by the publisher for review purposes. But the thoughts in this review are mine, and mine alone.

There’s darkness in the land. It’s making your average person go insane and hurt their neighbors and friends. When the darkness overtakes them, they’re hence known as Namtars. A soldier of Valkyrie, known as Niya is put in charge of finding out what’s causing this serious disease, and how to stop it. So you journey the land, finding new party members to help you stop the darkness, while you uncover the cause. Each character has their own motivation as to why they want to help you out, whether they want to save their sister or their village, or because their village elder told them to go!

The story itself kept me hooked from start to finish. Even if it did start a tiny bit slow. Throughout the game, you are looking for “Relics Of The Goddess”, as you’ve heard that’s what can defeat the darkness. Then a mysterious lady by the name of Kefir falls from the sky! She can end up getting rid of the darkness from people. You also learn that the two factions, the Valkyries and the Mentu, used to be at war, but there have been years of peace. But the Valkyrie Goddess is absolutely certain that the Namtars are a disease caused by the Mentu. So not only are you trying to stop a plague, you’re also trying to stop a war from happening! There are a few spots where I was left speechless as to the events that just happened, that I didn’t want to stop until I learned more, and also filled with joy when I got a new party member to try out.

By the end of the game, I was so invested in all of the characters, I even got a bit choked up at a twist that I didn’t see coming at all. Though there is little in the way of character development, each character feels unique. Plus with such a large cast of characters, there’s bound to be someone you love! Unfortunately, I felt like the gameplay hindered the story’s progress in some ways. But we’ll touch on them much later.

If you’ve ever played a Strategy RPG, like Disgaea, or Final Fantasy Tactics, you’ll feel right at home here. As the game plays like those, and you even get the option of many class choices. You then get to choose who you want to join you in battle, and move your team around the grid-based battlefield, while you beat the levels. Each level usually consists of the same objective, which is “kill everyone and everything”. Though there were a few where it tasked you with getting to a specific spot on the map to finish the map. There are some side objectives in each level, such as no teammate dying, or finishing in a certain amount of turns, or saving villagers if there are any. Now if you accomplish these, you don’t get any extra EXP, but you get an item that goes to a set of cards. Though to be fair, I never “finished” a card, so I never truly knew what they were. Whether it was backstory, or concept art or whatnot.

Now the one downside to the gameplay is that it’s slow. So very slow. I know it’s a tactical RPG, but the levels felt like they dragged on for far too long. The maps felt too big, my team members never felt like they moved far enough, and there was clearly an element system in the game that was never explained to you. So you’d think your water-based attack would be great against a ground or fire-based enemy? Nope. Doesn’t work like that. So sometimes my support characters dealt way more damage than my actual damage dealers. Which left me scratching my head a lot. So at one point, I just stopped trying to make sense of it all, and would just attack how I wanted, and with whatever attack I wanted. Though had the game shown me a Venn diagram, explaining everything, I feel like I could’ve made better use of all my characters, before each level. You’d have a lot of variety too, as you get to choose up to 8 characters per fight!

The game itself has a lot of variety when it comes to classes for all your characters. There are a whopping 21 classes to choose from! But there is also a caveat. Let’s take for example Niya. She’s a warrior-based character. Her final class is warrior-based. I can make her a mage, or a ranger class. But that would be a little pointless. Now as you do the story, you get class points called “Merit”. Once you earn enough Merit, you can advance all your characters to the next class. But this is where you need to be careful. The class tree splits into two categories. But the game explains it to you terribly. So your first advancement, you get to choose one of two classes. But the second class advancement, you get to choose from four! But if you choose the left side of the class tree, you can only choose the two leftmost classes, or if you choose the right side, you can only choose the two right-side ones. So you NEVER actually get to choose from all 4!

This was a real issue for me because once you choose a class, you’re locked in for good. You can go back, you can’t switch it around, you have to stay. Had I known this, I would’ve made all of my characters have a class that’s able to heal themselves. The reason why is because to get their last job advancements, you need to do a side quest for them, that you find on the map when controlling them. Now a lot of these characters are all by themselves. So if you can’t heal yourself? Chances are you won’t win. Unless you grind like mad. Even then the grinding never felt like I was getting anywhere. So there were a few characters that I never got to their last job advancement, so I stopped using them, because by the end, they weren’t dealing out enough damage to be viable! Although there were about 2 characters that I wish I never advanced to the final stage, because their last class felt worse than the one they were using previously!

Now as for the grinding, it’s pretty bad. The overworld map is just that. A map. Then you have little nodes that you select, and your character walks there, and you get to just jump into a fight. Now the fights sometimes take 30+ minutes, if you’re trying to level some characters. Even longer if you’re leveling up weaker ones, because they won’t have a high hit chance to hit enemies, depending on how high the enemy levels are that you chose on the map! So if you plan to use all the characters, and there’s about a dozen, you’ll need to spend your time grinding. A slow boring, mind-numbing grind, because the characters who weren’t in battle don’t get experience. Now I know this is a normal thing for some RPGs. But in traditional RPGs, it’s easier to level characters normally.

I will say though, that a nice thing that this game does with its systems, is that you can save, in the middle of a battle. So if you ever need to leave the game, or are in a tight spot, you can just save and come back. Or be like me, and save just before your last character moves, in hopes that the enemy hits your character with high HP, and not your character who’s hanging on by a thread. Then just keep loading until it happens! I used this trick so many times to keep my entire team alive in battle, just to make my life easier in the long run!

Empire Of Angels IV is a hard game for me to recommend. On one hand, the story is captivating and engaging and there’s such a diverse cast of characters, with funny and well-written dialogue. On the other hand, the gameplay is slow and not explained very well at all when it comes to some of its deeper mechanics. So it really drags down the parts when there is no story happening. Plus if you try to grind your characters levels, you’ll really be putting in a lot more time, for what feels like very slow gains. If you do decide to get it. At least wait for a discount. Or some quality of life changes, because as I said, the story was so so so worth it. But how do you fare with the rest?

Let me know in the comments, or come discuss with me on the official DEX.EXE discord!