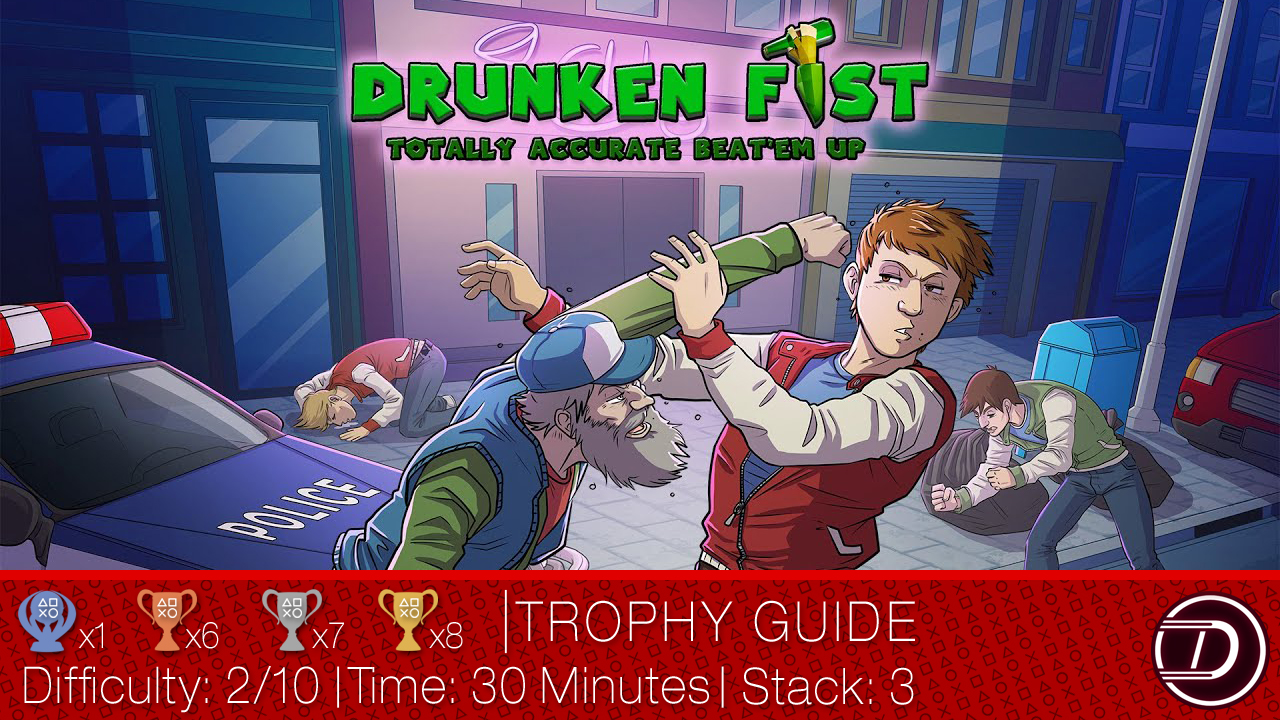 Welcome to the Drunken Fist Trophy Guide!
Developed by Deklazon & EastAsiaSoft, you play as a drunk guy, who wants to beat everyone up in the streets! Try not to pee your pants!

Step 1: Beat Level 3
The first thing you should be worried about is beating level 3 and The Slipper trophies, as the Slipper set of trophies is easily the most annoying of the trophy list!
Remember to search the levels as best as you can, to find bottles and burgers as well, but they’re always out in the open so you should have no problem!

Then when in level 2, be sure to beat up the cop. Or you can beat the cop up at the beginning of level 4. At the end of this step, you should have 90% of the list done!

Step 2: Gather Bottles and Eat Burgers
Chances are that after you beat level 3, you’ll still need to find some bottles and eat some burgers. You can either restart the game at this point, or keep going through the levels until you get these trophies done. When they are done, you’ll be finished with this interesting game.

This game has some terrible controls, and is hard to understand, so here are some tips!

To get this, you have to beat up 6 enemies. This will come at the end of level 1, as there are 6 enemies in total. To attack, you can press Square of X. There’s also a combination of attacks you can do, and you can see that by looking at the moves list in the pause menu. After you beat 6 enemies, this is yours.

This will unlock once you beat up 24 enemies. Refer to

The Puncher I for info on how to attack.

This will be yours once you beat up 52 enemies. I failed the second level once, so this trophy unlocked for me on level 3! So it should unlock during level 4 normally! Refer to

The Puncher I for info on how to attack.

Bottles are a way to recover your drunken state, and are found on trash cans in the levels, and on benches. You get this trophy after picking up 1 bottle in a level.

This trophy will unlock once you pick up 5 bottles. Luckily this is cumulative, so you don’t need 5 bottles all at once. Refer to

The Collector I for more information on where to find bottles.

After you pick up 11 bottles, this trophy will unlock. Just like the last bottle related trophy, this is cumulative! Refer to

The Collector I for more information on where to find bottles.

Burgers are found in every level past the second one. They’re like the bottles, where they’re mostly found in the levels near trash cans. Eventually you can find some on benches and steps of apartment doors! You need to not only pick them up, but eat them by pressing right on the d-pad. Once you’ve eaten a burger, this trophy pops!

For this trophy, you’ll need to eat a total of 6 burgers. This is cumulative, across your save file. Refer to

The Muncher I for more info about burgers.

To get this trophy you need to eat a total of 12 burgers! Just like the previous trophy, this is cumulative. Refer to

The Muncher I for more info about where to find burgers, and how to eat them.

For this trophy, you need 10 enemies to slip in your pee. Refer to

The Slipper I for more info on peeing.

To get this trophy, 20 enemies have to slip in your pee. It’s best to wait for your pee to refill before you attack a group of enemies, so they can fall in it, to get this trophy done faster. Refer to

The Slipper I for more info on peeing.

This is for beating level 1!

This is obtained after you beat level 2!

Beating level 3 will unlock this trophy for you!

This trophy is for using 3 special attacks against enemies. It only counts as a use, when the attack actually hits an enemy.

The moves list shows you all the special moves you can use, and are the ones with many combinations. The one I used the most was the flying kick which was used by pressing

. When you use a special attack, it uses almost all your stamina, so you have to wait for it to recharge.

This trophy is for hitting 12 enemies with special attacks! Refer to

The Fighter I for more info about special attacks!

Once you hit 24 enemies with special attacks, this trophy will unlock! Refer to

The Fighter I for more info about special attacks!

This is for beating up 3 enemies in 12 seconds. At the end of level 1, there is a group of 3 enemies. If you slowly damage each one with one punch, you can then kill them with one kick each. So they will die one after the other! If you’ve done it in 12 seconds, this trophy is yours. But there are plenty of opportunities in later levels!

To get this trophy, all you have to do is hold the left stick forward or back until you fall over!