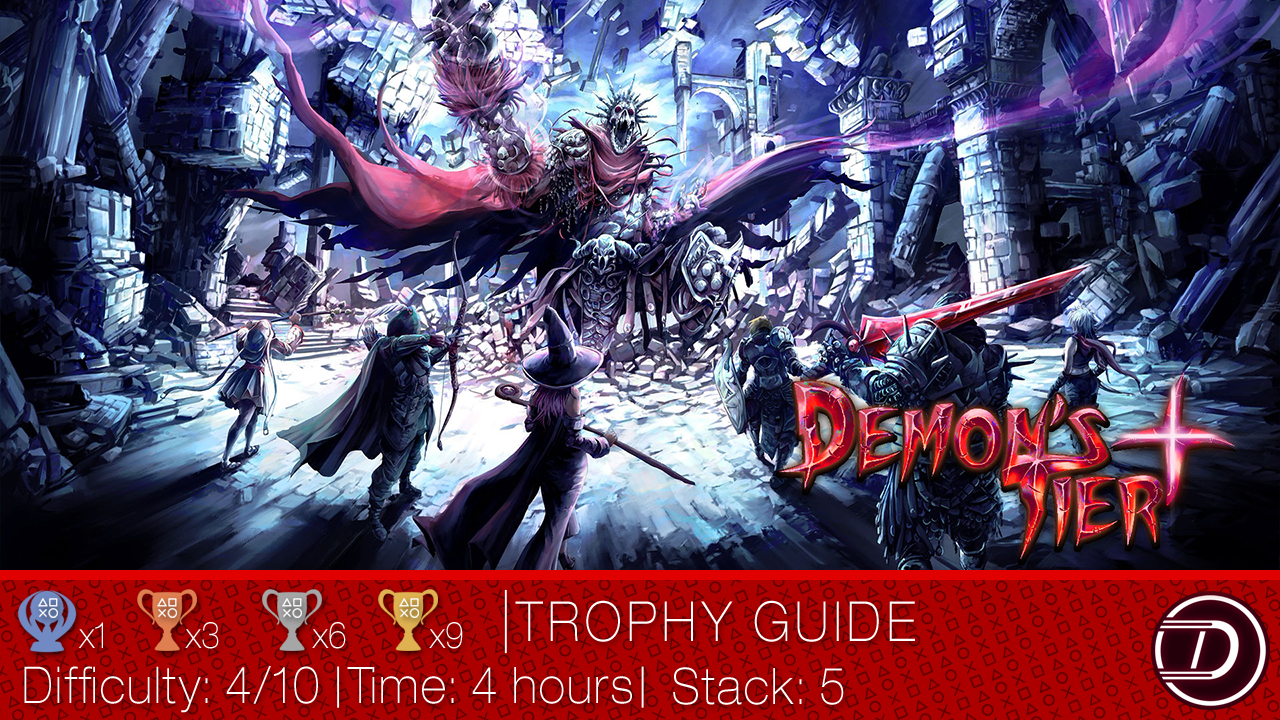 Step 1: Unlock Characters
Right away, you’ll want to unlock the Hunter and Cleric. You do this by getting D-Coins in the dungeon! You may not have any trophies after this step. But that’s okay.

Step 2: Clear Tier 1
Once you unlock the Hunter and Cleric, decide what one to play as, then you can do one of two things. Either kill some bosses to get some blueprints for better weapons. Or just try and run through it all! After you decide what to do first, then it’s off to beat the game! Don’t forget to buy 3 Silver Keys, and stock up on potions! By the end of this, you’ll have plenty of the trophies!

A Creature From Inferno

Not What It Seems

Step 3: Complete Tier 2
At this point, it’s time to play through the game…..again! I recommend the Valkyrie class. As they get a ton of extra stats, and they get to heal! After this, you’ll have at least 2 more trophies.

Step 4: Finish Tier 3
During this step you’ll need to play the game through for a 3rd time. You have two choices. You can use the Valkyrie class and be able to heal a lot because of the skill. Or you can do a TON of damage as the Knight class, but have to play a bit more cautiously because you rely on potions for health. I recommend also buying the Meta-Key if you have the D-Coins! Either way, after this, you’ll have a couple more trophies.

Step 5: Grind the Fly Mother kills
Unless you die a lot, chances are you won’t have 5 fly mother kills. So during this step, play to the first boss, and if the boss isn’t the Fly Mother, restart the run. At the end of this, you’ll have all the trophies! After you also have enough D-Coins to buy everyone of course!

Unlock all trophies in Demon’s Tier+

This is the easiest trophy of the game. Just find some enemies, and let them hit you until you die!

After you enter the dungeon, and leave the first couple times, you open up the Blacksmith and the Item Store. You’ll need to use some D-Coins to buy at least 1 Health Potion. They cost 1,000 Coins, but on your full runs, you’ll need 3 Health Potions anyways! So this will come naturally in a sense.

This will come naturally as you get “Save All Prisoners”.

For this, you have to save all the prisoners in a single run. For this though, you have to get Silver Keys. You buy keys from the item shop for 100 D-Coins, when it opens up. The prisoners are then on floors 2, 5, and 9. Prisoners are a good thing to save every run, as they help deal damage. So bosses die extra quick. The second you open the last prisoner cage, this trophy pops.

This boss appears on Level 3 of the dungeon. This boss is quite simple actually. At first, it will shoot waves of bullets at you. Eventually it will spawn one enemy on each side of it, while shooting 1 big ball at you. So you ha e to keep moving. Eventually it will switch back to its waves of bullets, and then switch back again. Very easy for a boss fight. You can refer to a video below as well on how to fight it as well!

This boss is a giant spider! It is found on level 6 of the dungeon. This boss is where things start getting difficult. This boss isn’t difficult, but it starts throwing in attacks where you need to guard. It will do some basic attacks that are easy to dodge, but then it will make bullets all over the screen, in one line, from right to left. When they get near you, you have to hit

This boss appears on Floor 8 of the dungeon. Now this boss is where it starts to get ridiculous. You have a very tiny portion of the screen to move around in. The bosses left claw will shoot single, giant projectiles at you, and you have to dodge them. Not too hard. It’s when the right claw comes into play, that the madness ensues. It will fill the screen with many, many bullets. You have to either dodge between them to get to a safe space, or guard with

to block them away and make a safe zone. Now, when the right claw is shooting, the left claw will start doing the same, leaving even more bullets, and less safe zones for you to stand. Eventually, it will stop, and the boss will go back to 1 single, big projectile. If you don’t kill it quick enough, it will switch back to the many little bullets attack though. Below is a video for reference, if you’d like one.

This boss is on level 11 of the Dungeon. This is one of the two bosses that moves constantly. He will move around the arena and shoot projectiles at you. Eventually he will spawn other enemies, that can’t be killed, that also shoot at you. When the boss is done with his attacks, he will always disappear briefly, before appearing again.

This boss appears on Floor 13, as the first boss in the boss rush at the end of the game. For this boss, he has two hands that you have to shoot. After taking enough damage it will disappear momentarily. Then attack the opposite hand. Now, when the hands start glowing, they shoot a projectile at you that you HAVE to block, so it damages the boss. Do this until it dies.

This is on the 15th floor of the dungeon. The final boss. This boss is a bit annoying if you don’t understand it. You CANT attack the boss, without it sending shots back. What you have to do is dodge the bullets, until his hands glow, and shoots a giant ball at you. You have to block it, to send it to the boss, and THEN you can do damage! Eventually the boss will get his protection back. So you have to dodge again! Repeat this until it’s just the boss, sitting alone, then you can go all out! After you kill him, you win!

This will come naturally as you play the game. Even if you manage to finish it all with no deaths, you’ll easily open up 100 chests in your runs for this trophy. Chests are scattered everywhere on every floor, and have either gold or health. So you’d have to be crazy to not open them.

The Fly Queen is a boss on the 3rd floor of the dungeon. The thing with this boss, is it only has a chance of appearing instead of the Worm boss. So killing it 5 times requires you to play to the 3rd level many times, until you manage to get it as a boss 5 times! Now, this boss just basically flies in a circle around the arena and shoots a few projectiles at you. So just dodge the bullets and it should die really quick!

To get a new character, you have to buy them from the Inn for D-Coins. D-Coins are acquired by killing enemies. You can get an upgrade in the dungeon to get more after every kill. When you die, you lose all your coins, unless you can get to your grave and get them back. The character costs are below!

You have to finish the game on Tier 1 of the dungeon. I recommend using either the Hunter because of his range and starting damage, or the Cleric, because you get to heal yourself! Beat the game on this tier, and it unlocks!

To unlock Tier 2, you have to beat Tier 1 of the game. Then you have to redo the game on Tier 2. For this, I recommend the Valkyrie, as they start with a ton of damage, and their special skill heals them! After you beat the game again, this trophy unlocks!

To unlock Tier 3, you have to beat Tier 2. For this run, you have one of 2 options. Either play as the Valkyrie again, or the Knight! The Valkyrie can heal, but the Knight does an insane amount of damage! So either is good! After this run, this trophy unlocks.

After you clear Tier 2, you unlock a Meta-Key in the shop. This lets you unlock everything! So when you can, buy it at the shop for 40,000 D-Coins!