DEAR ESTHER goes free on Steam for its Tenth Anniversary 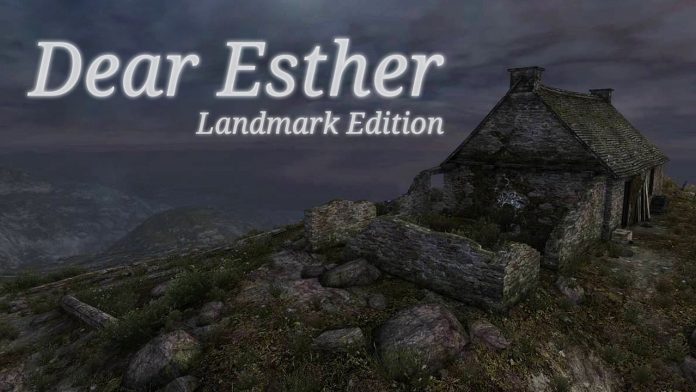 The Chinese Room, and publishers Secret Mode are pleased to announce they will celebrate the tenth anniversary of Dear Esther by making the genre-defining 2012 narrative exploration game free to download from Steam on 14 and 15 February.

On 14 February 2012, Dear Esther immersed players in its stunningly-realized world – a remote and desolate island somewhere in the Outer Hebrides. Abandoning traditional gameplay for a pure story-driven experience, Dear Esther combined beautiful environments with a breath-taking soundtrack to tell a powerful story of love, loss, guilt, and redemption.

Dear Esther has won multiple awards since its release in 2012, including the prize for “Excellence in Visual Arts” at the 2012 Independent Games Festival, “Best Use of Narrative” at the 2012 Develop Awards, “Visual Design” and four more awards at the 2012 TIGA Awards, and five nominations at the 2012 BAFTA awards.

“It was a joy working on Dear Esther with such a creative, talented, and inspiring group of developers, and we’ve been delighted and humbled by the warmth of the gaming community over the last ten years,” said Dan Pinchbeck of The Chinese Room. “We are thrilled to offer Dear Esther to a new generation of players for its tenth anniversary, and I’m personally looking forward to hearing from those players who are able to explore Dear Esther’s island today for the very first time.”

Dear Esther is usually £7.99 on Steam but is available to download for free from 14 to 15 February. Dear Esther is also available for purchase on PlayStation 4, Xbox One and iOS devices.

The Chinese Room’s other titles include Amnesia: A Machine for Pigs, Everybody’s Gone to the Rapture, and Little Orpheus – launching 1 March for PlayStation 4, PlayStation 5, Xbox Series X|S, Xbox One, Steam, Epic Games Store and Nintendo Switch.