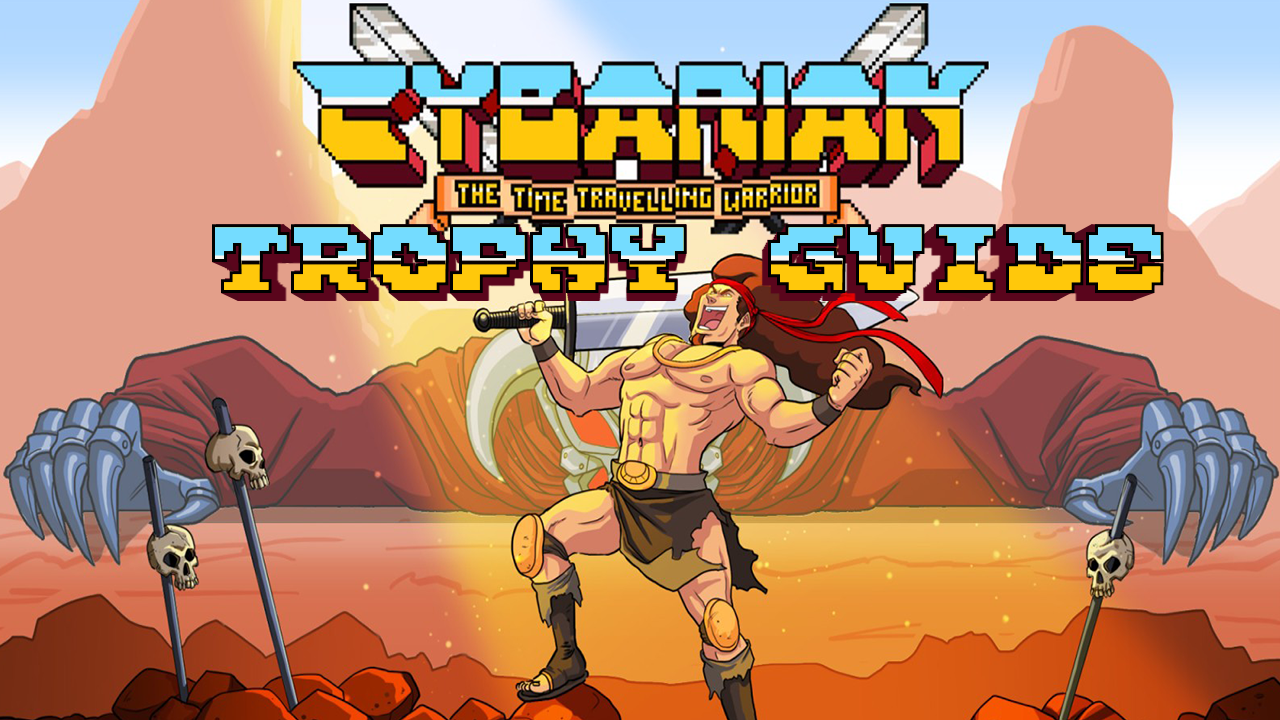 What Kind of Sorcery is This?
Glitched trophies: None
difficulty related: 1

With All My skills!

Welcome to Cybarian: The Time Travelling Warrior Trophy Guide! This game is another 8 bit style platformer from Ratalaika Games. A funny and a little bit challenging platinum that can be completed in less than an hour.

Set the difficulty to “Easy” and play the game until youreach the Stage 3 boss (You do not need to kill it). At the beginning of the game, go left instead to right in order to discover a secret room full of orange crates with coins inside. Make sure to grab as many coins as possible and to use the vending machines spread around the stages. Pay attention to hit one of the two homeless guys at the beginning of the game and to kill a Laser Eye enemy while progressing. Once you reach the Stage 3 boss, back up to the Main Menu and set the difficulty to “Hard” and reach the Stage 1 boss in order to unlock your last trophy of the game and the platinum.
Here a video Walkthrough too:

Step 1: Easy mode and miscellaneous trophies
During this step you will play the game in the easiest difficulty. While progressing you will notice that every type of enemy corresponds to a trophy. Remember that every enemy drops coins when defeated so try to collect them all before they disappear; you will find orange crates which also contain coins so destroy them all and collect everything you can. Sometimes during a level, you can see a vendor machine: stop in front of it and buy 5 hearts to unlock the 3 trophies related. Then make your way until you reach the Stage 3 boss and back out to the main menu.

I’ve Lot of These

What Kind of Sorcery is This?

Why is He Hitting Me With a Tree?

This is Not a Bow

Is He Even Human?

I Can Now Roll

I Can Now Throw My Sword

Step 2: Reach Stage 1 boss on Hard Mode
In this step you will start a brand new game on “Hard Difficulty”. Don’t worry, it will not be hard at all because the game gives you all the skills from the beginning of the game and you just need to reach the Stage 1 Boss but you don’t have to defeat it. Stage 1 is also the easiest one to complete.

At the end of this step you have earned these trophies:

With All My Skills!

At the beginning of Stage 1 you can find two homeless guys around a fiery barrel. Simply hit one of them by pressing

to earn the trophy. 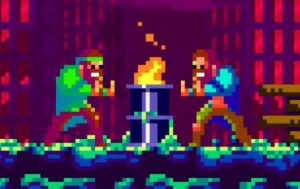 To perform a full combo, you need to press the

button 3 times in a row. However, you need to press it within a certain amount of time since mashing the button won’t work.

When you press it for the first time you will notice that your sword will glow. When it glows, press

again to execute the second part of the combo repeat the same procedure for the third time and you will unlock the trophy. Try to get used to this method as it’s the best way to kill the enemies.

You will unlock this trophy when you collect your first coin. See

You will unlock this trophy when you collect your 20 coins. See

You will unlock this trophy when you collect your 40 coins. Coins can be found while playing from two different sources:

Make sure that you grab them quickly, as they disappear if you leave them on the ground for too long without collecting them.

NOTE: At the beginning of Stage 1, go left instead to right in order to discover a secret room full of orange crates with coins inside.

You will get this trophy when you buy your first heart. See

You will get this trophy when you buy three hearts. See

button. Once you’ve bought a total of 5 hearts, the trophy will pop.

Laser Eye Enemy can be found throughout the game on every stage and they fire a laser beam which targets your character wherever you are. They’re the weakest enemies in the game as they will die to a single sword hit.
This trophy is considered missable as you can hide and overpass every Laser Eye enemy withouth killing them, so simply kill one of them and the trophy will be yours.

Bandana Enemy will be the first enemy you come across in Stage 1. To simply kill them, run up to them and immediately complete a full sword combo in order to avoid being attacked.

Rifle Enemy is the second enemy type of enemies you’ll find on Stage 1. In order to kill them easily, simply wait that they shoot a bullet, then jump over it and perform a two-hit combo to kill them.

This is the first enemy type you’ll find on Stage 2. In order to kill the thoughest enemy of the game, just quickly run up to it and perform a full combo; after that, he will try to hit you and to avoid being avoid hit you have to perform a roll with

then do another full sword combo. The first two hits of the second full combo will kill the Fat Enemy.

This is the third enemy type you’ll face up on Stage 1. To easily kill a Bomb Launcher Enemy, wait for them to fire a bomb, then run up to them and hit them twice. Two hits and this enemy will die and the trophy will pop right after.

You will find this type of enemy on Stage 2. To kill this one simply perform a full combo before they can it you and you will earn this trophy without any effort.

At the end of each stage, there will be a slot-machine mini game.Complete a spin an the trophy will be yours.

NOTE: if you win, you will increase your maximum heallth by one heart, but you will unlock the trophy even if you lose.

To get this trophy you just need to reach the Stage 1 boss. You don’t have to kill it to unlock this one but you need to kill it for the

I Can Now Roll trophy (more details in its description).

To get this trophy you just need to reach the Stage 2 boss. You don’t have to kill it to unlock this one but you need to kill it for the

I Can Now Throw My Sword trophy (more details in its description).

To get this trophy you just need to reach the Stage 3 boss. You don’t have to kill it to unlock this one as there are no trophy related.

There are some differences between Easy and Hard difficulties:

You get this trophy when you reach Stage 1 boss while playing on Hard Difficulty. However, the boss doesn’t need to be killed to earn this trophy.

The first boss is a robot spider and this boss fight is divided in two phases but it should be easy to kill him. However here a description of its attacks and how to avoid them:

After beating him, you will unlock the ability to roll by pressing

The second boss is a bull robot with a jetpack and this boss fight is divided in three phases but it should be easy to kill him. However here a description of its attacks and how to avoid them: