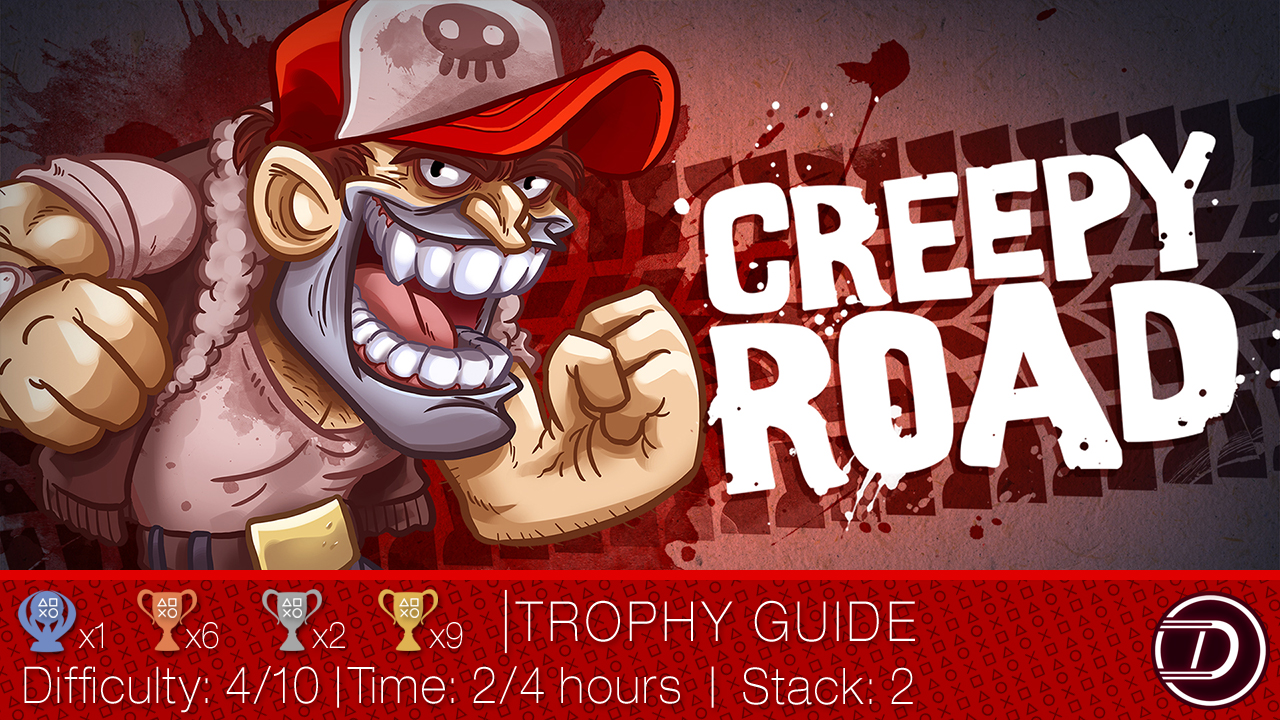 Welcome to Creepy Road Trophy Guide! A beautiful hand drawn immersive experience where you play as Flint Trucker; a “good guy with a rich inner life”.

Flint has been drawn into a psychotic alter world that is falling apart and you have to battle through a number of levels, each with different enemies to try and reunite yourself with the love of your life Angelica.

There are no missable trophies in this game so you are free to play at your own leisure.

The game itself is beautifully designed and the hand-drawn graphics really give you an immersive play through.

There are a number of different weapon choices throughout each level and once collected you can scroll through to the weapon of choice for that particular level. At the beginning of every level however you are reduced back to your pistol only.

Step 1: Complete the Game
Chapter select is available upon completing the chapter, so feel free to play this game and unlock a number of story related trophies, as well as some of the miscellaneous ones too.

What is your parking malfunction?!

The best of us fall

It’s not that simple…

I didn’t expect this from ya!

Step 2: Farming Deaths, Kils & Misc
There may be some trophies that will need to be farmed post game. Some of these will result in replaying certain parts of levels over & over, so check the relevant trophy description for any that you are missing.

Obtained once all other trophies have been achieved

This trophy will be earned through natural gameplay. See Annihilator for more tips if you are having any issues.

This trophy will be earned through natural gameplay. See Annihilator for more tips if you are having any issues.

If you have not achieved this trophy prior to finishing the game, a great place to farm the kills is at the beginning of Chapter 8: In the Sky.
There is however no in game counter, so keep replaying this chapter up until the first electric fence at the bottom of the screen where you can kill yourself and replay the initial part of the level.

Hamburgers are you life source and are sporadically placed around the levels for you to munch away at if you need to replenish you life bar.
There is more than enough opportunity for you to have collected 100 prior to finishing the game.

Simple enough if you have this trophy in mind whilst playing the game, as there are enough Vehicles throughout the game to achieve this in your initial playthrough. Every time you come across a vehicle just shoot/grenade it a few times and it will explode.

If you have not achieved this trophy prior to finishing the game, a decent place to farm the vehicles is at the beginning of Chapter 4: The Suburb, where there are 3 cars in the immediate vicinity and a handy rocket launcher. You can destroy the 3 cars, die and repeat until you have the 20 needed.

Arguably the hardest single trophy in the game. You must complete Chapter 8: In the Sky without dying. “In the Sky” scrolls at it’s own pace and you are faced with a number of enemies that will fly/shoot at you from right to left.
My advice here when facing the Seagulls is to stay in the high left of the screen and shoot only those in your path. If you die make sure you pause and restart. The “no death” will not count if you simply continue.

The Seagulls will not fire anything at you. When facing the Elephants, shoot the Green Goo that they fire at you and be prepared to move around a little bit more as they will move down the screen as it scrolls.
You will also have too navigate some electric fences and avoid falling rockets. The occasional enemy on a platform should not cause you any issues here.

With practice and learning the layout of the level you should achieve this in no time.

Can be first obtained in Chapter 1: The Forest after killing the first few enemies. Alternatively this can be earned right at the beginning of Chapter 5: The Sewerage.
Simply walk into the goo and allow your health to diminish. Rinse & Repeat if needed.

Mines do not seem to appear at the beginning parts of the levels, so you will need to make a conscious effort to get this one. Keep this in mind during your initial playthrough, as the Mines cannot be farmed as easy as the other trophies in this game.
Once a mine has exploded you will need to restart the whole level (not just the checkpoint) in order for it to appear again.

If you have not achieved this trophy prior to finishing the game, the best level to farm the mines appears to be Chapter 4: The Suburb, as you come across one after killing a couple of ways of enemies.
Combining this with What is your parking malfunction?! , would make the farm seem less tedious.

Simply die 50 times prior to finishing the game. Rest in Peace has some further details on how to farm kills if you are excellent at gaming and did not die nearly as many times as you should.

Simply die 150 times prior to finishing the game. Rest in Peace has some further details on how to farm kills if you are excellent at gaming and did not die nearly as many times as you should.

Possible to obtain during your first playthrough, but if you’re great at this type of game and failed to die this many times it can easily by farmed afk in Chapter 11: The Hell.
As soon as you start the level you can walk left to you demise; you will then automatically restart the level in the same place and repeat the left walk enough times to obtain the trophy.

During Chapter 2: The Farm you will come across an “Outhouse” type structure after the initial wave of enemies. Blow this outhouse up with your grenades, or shoot with your gun and a Marioesque pipe will appear.
Head down the pipe and the trophy will unlock on the next screen.

Obtained during Chapter 5: The Sewerage. Follow the path along from the beginning and jump over the initial 2 gaps in the path. Once you reach the end of this platform you will need to fall down one level and proceed all the way back to the left. Eventually you will hit brick wall, which you will need to blow up with the rocket launcher.

Once the wall has gone, proceed into the new room to obtain this trophy.

Insane Strong Man is the first boss you come across and is at the end of Chapter 3: The Fair. The boss has 3 different attack styles (Jump, Throw & Smash).

When he jumps you can run underneath him and turn and shoot.
The Throw & Smash attack’s will result in Spotlights either being thrown at you, or falling from the ceiling. They are fairly easy to avoid.

The Hyperman will need to be dealt with at the end of Chapter 6: The Town. This boss again has 3 different attacks (Slam, Bubble & Laser Shot) and they cycle through the same pattern over and over.

The slam can be avoided by noting the Red Target Circle and moving out of the way when it is stationary. This will be followed by a “Slam” from Hyperman, where you have to jump prior to him hitting the floor to avoid damage.
After the “Slam” you can jump up the platforms to achieve hits on the boss.
The other 2 attacks are fairly easy to avoid.

Lucky The Koala is the boss at the end of Chapter 9: The Factory
Again this boss has 3 different attacks (Gun, Rockets & Electric Ball) that are used in the same pattern over and over. This time however you are only able to hurt “Lucky” after you have fired the “Electric Ball” back at it.
Keep working you way through the pattern by jumping over the 3 waves of shots and avoiding the 2 waves of rockets, then firing at the electric ball to divert it back to Lucky.

Willy The Musician is the boss at the end of Chapter 11: The Hell and the battle is split into 2 parts.