Chronos Before The Ashes Review (PS4) 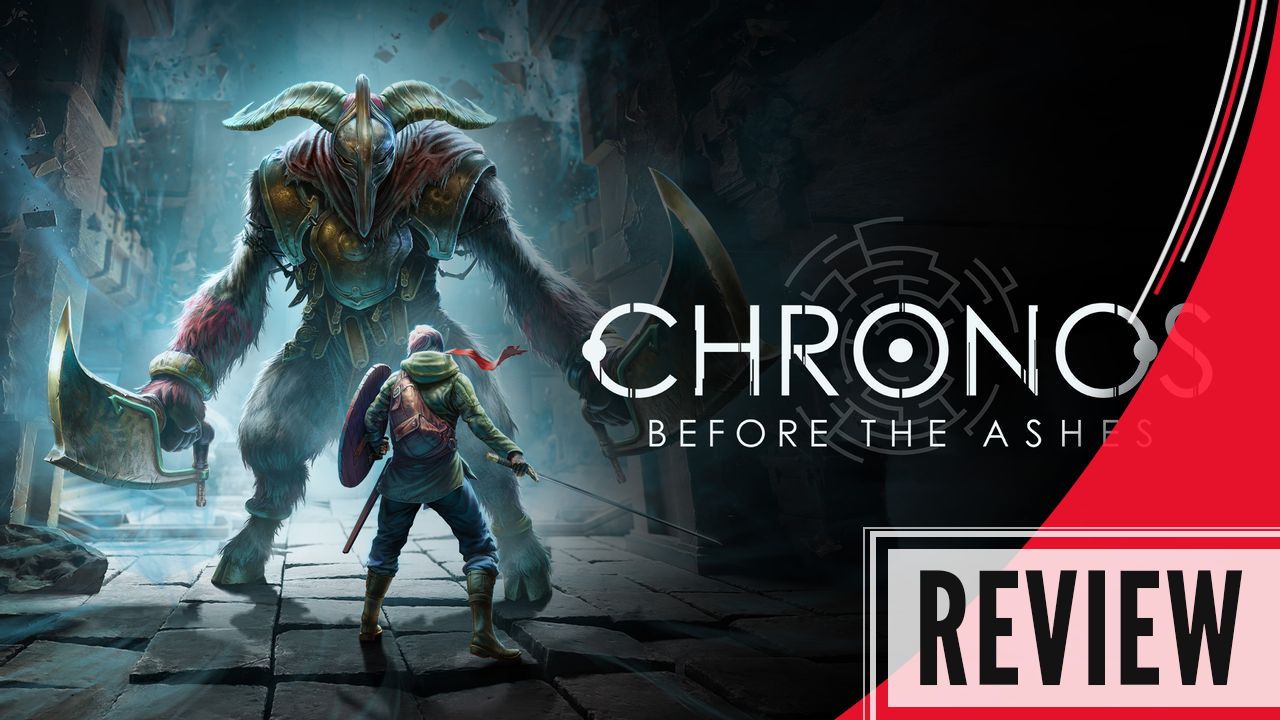 Chronos is a souls-like game, developed by Gunfire Games, originally released on Oculus Quest VR in 2016. It was released late 2020 for consoles after Remnant: From The Ashes sold so well! It’s also a prequel to Remnant!

The world has been ravaged by an apocalypse, and it’s your job to kill the dragon, to stop another apocalyptic event from happening. So you get cast on your journey, to wake up on an island, at a location known as “Ward 16”. Inside the ward, you find all the staff are dead, and it’s in lockdown. But you stumble upon a mysterious crystal, which transports you to another universe. The game then tells its story through environmental storytelling and reading lore pages that are scattered through the world. In this alternate universe, you find out that the world used to be a bright, vibrant kingdom, with lots of people, and bustling cities, only to be taken over by a species known as Krell. They kill the king, and lock up the princess, and kill all the citizens who don’t run off. Is this information imperative to the actual storyline of the game? Of course not, but it sure is cool!

Now in the real world, you learn about what happens in it, through the use of computer terminals. You learn that in Ward 16, there are three patients, known as “Dreamers” that are hooked up to machines, that are somehow connected to creatures in the alternative universe. But they’ve been connected so long, that they cannot co-exist without each other. Now, these creatures are the Guardians of the antagonistic Dragon, that you’re tasked to kill. So killing these creatures ends up killing the humans connected to the creatures. Now as much as I didn’t care about the story of the kingdom in the alternative universe, and its downfall, the story of the real world is what got me. I sat there and read every lore piece I found, and thought it all over, and pieced it together, and found myself wanting more. I need more. Gunfire Games have managed to make such a fantastic world, with such an interesting story that I am so drawn in, that I can’t wait to play Remnant From The Ashes. So luckily for me, there is more!

Now unfortunately for the average player who just goes from point A to point B, without looking for these lore pieces, or just doesn’t end up reading them after finding them, they’re not gonna have the same feelings I do towards the story. They won’t understand who the Dreamers are, or how they’re connected to the creatures. Or what Ward 17 is, even though you learn about it from lore pages at the beginning of the game! This is the one true downside to having lore tied into the environment or computer terminal folders that not everyone will read. But if you’re reading this, and plan on playing Chronos, I recommend you read those lore pages!

Now this game plays like a traditional Dark Souls game. As you kill enemies, you get actual experience and level up immediately, as opposed to spending your accumulated experience at a bonfire. You then get some attribute points to put into your standard stats like Strength, Dexterity, Arcane, or Vitality. They also all do what you would expect them to do. Then you have slow, methodical combat, where blocking or dodging is imperative, while learning the enemy’s attack patterns and tells, and then learning when to attack! It all culminates to you slowly exploring, and watching every corner before you turn them, and hoping that death isn’t looming around it. Unfortunately in this thought, to me, death wasn’t just an inconvenience, it was an annoyance, and for one reason alone. When you die, your character ages. When he starts getting super old, he becomes more of a magic user, as opposed to using strength and weapons. I play these kinds of games with a strength build, so this disappointed me. Now don’t get me wrong, it is a really cool concept, but it wasn’t for me. So I would back up my save every couple of checkpoints, so that if I died, I could redownload it, to essentially prevent the death. So I saw the opening logos a whole lot, considering I was playing the game on Hard. Though the only way to refill your healing items was through death, which was a little weird to me. It also kind of sucks too because you get so few healing items, and the Crystals, which are basically bonfires, are so far from each other, it doesn’t seem like I would have stood a fighting chance to get to them. Though it could’ve been easier on Easy…

The internal need for me to save scum though didn’t take away from my enjoyment of exploring the world though, as there are many corridors to explore and puzzles to solve, and oh boy are there plenty of puzzles! When you aren’t killing enemies, you’ll be figuring out how to progress through that one door that has been locked, for so long, or figuring out how to use that bag of corn that you got at the beginning of the game. You’ll also end up finding items that you have to combine with other items, so that they have a function in the puzzle-solving process! It felt very Resident Evil to me. But that also means you have to explore the environment very well, or you’ll be lost for hours. At the beginning of the game, there was a portal I needed to use, but I didn’t know where to. I had to look in a bookcase very carefully, to find another portal, and then input those symbols into the original teleporter, to get into the bookcase. It was infuriating and I felt like a complete moron, considering I looked at the bookcase a ton of times! Luckily at this point in time, there are tons of walkthroughs to help you if you get stuck. But after the first quarter of the game, I was flying through, not really getting stuck anymore.

In a game like this, you also cannot forget about the big bad bosses that you will have to take down, which will absolutely destroy the unprepared. During the boss fights, when you end up taking out some of the bosses health bar, they also usually change their tactics and get a new move or two. So having to constantly be on my toes, really helped drive home the ferocity of the boss encounters. There was one boss in general that took me a great many tries. As it takes up most of the arena, and this arena is kind of small. I had to learn its attacks really well, so I knew when to dodge, as it was so massive, its attacks broke my defense stamina easily, or the damage went straight to my health instead of doing anything to my stamina! It was fun and exciting, and aggravating, but it made the victory so much better. Then there’s one boss, that you’re figuring out how to get to him, but he’s so massive, that if he touches you, you die instantly! That’s right, he’s in the environment with you partially! I can’t stress to you how awesome it was to see this, as opposed to the regular scenario of a boss being behind a giant door at the end of the section.

The graphics in the game look pretty well done, as it goes for more of a cell-shaded look, but this also leaves a lot of textures looking muddied, or disgusting. Upon loading of the game, or dying as well, the game took a second to load all the textures up, but this may be different on Ps4 Pros or a Ps5, considering I’m playing on a base Ps4. But so long as you don’t look close enough, the environments are beautiful and well designed. Like the forest of Pan Creatures, or the weird working of the Labyrinth. Though the first couple areas of the game are a lot of brown-looking hallways, so there’s not much to see there. Then the music is beautiful and serene when it plays, or the little intense tune that plays during boss fights makes you feel on edge the whole time as well. It also took me a while to get used to hearing my character’s footsteps. They would echo throughout the halls as I ran through them, which caused me to think enemies were around. Or in the caves of the forest, crunching on the rocks made me unsure if enemies were creeping up behind me, so I was always constantly checking, because I never truly knew!

For a souls-like game, this has quite a bit of replayability. So if you want to see if you can make it through without dying to keep an STR build, or die a lot to try a magic build, all the possibilities are there! Want to play it on Hard without leveling up any stats? That’s what these games are for! There are so many ways to play this game, if you want to try them all. One day I’ll replay this game, and when I do, I’ll definitely replay on Easy and try a magic build, so that way if I suck at it, at least it won’t be too hard!

This game was a joy to play, and it really helped set up the world of Remnant From The Ashes, which I’m now even more excited to get into. The exploration was fun, the encounters were tense due to the lack of bonfires, and the bosses were always awesome to see. But again, the lack of bonfires made me play the game with save-scumming so I didn’t have to do huge sections over again, so it sucked seeing the logos again and again, and the aging system didn’t sit with me. But for others, it might be a great change of pace to how you play your games if you’re forced to magic. I wouldn’t skip this one if you like Souls likes, and you plan on playing Remnant. It’s a treat, and will suck you in if you read all the lore! I promise!

Chronos Before The Ashes