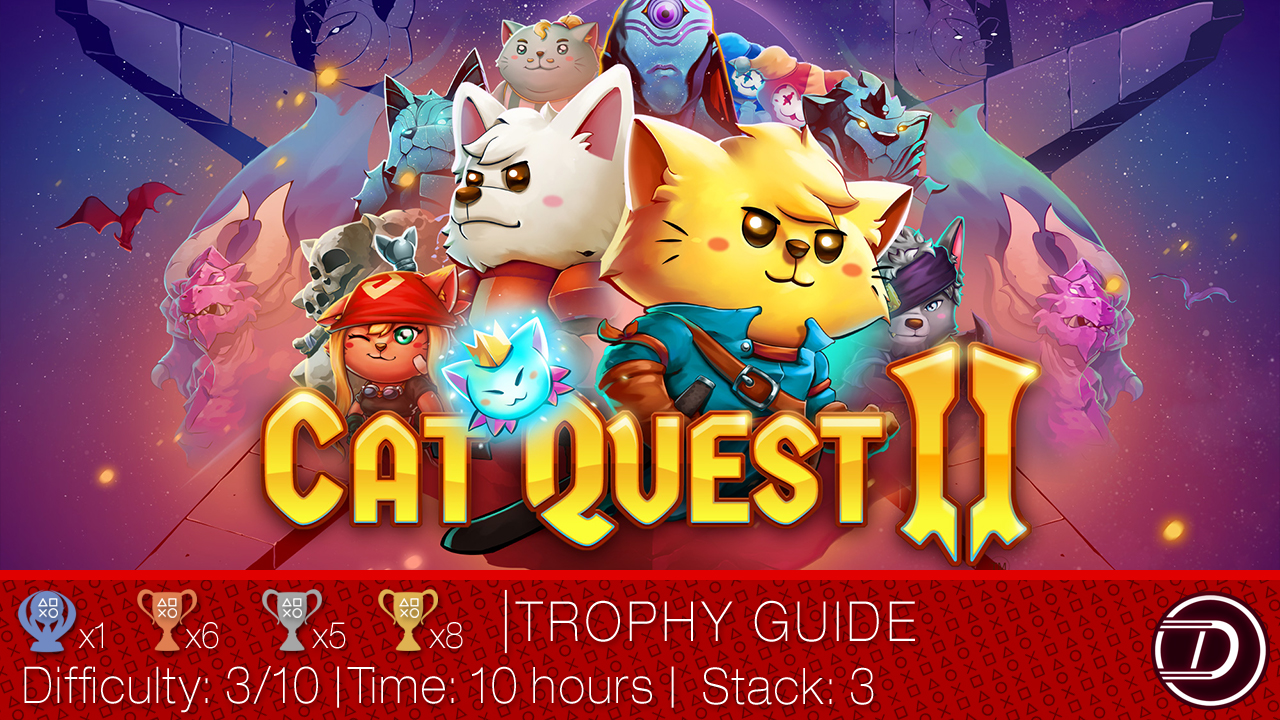 Welcome to the Cat Quest II Trophy Guide!
Meow meow meow. This game is the awesome follow up from GentleBros to the fun indie Cat Quest. Enjoy this easy, silly adventure as you beat up dragons and dogs!

Furriend of the People I

Furriend of the People II

Furriend of the People III

Step 2: Dungeons
In this stage, it’s time to clear out every single dungeon. This will get you the bulk of all the equipment needed for the Fashionista Tails III trophy as well! After this, you’ll probably only have 1 trophy left!

Step 3: Get all the equipment
Now the last step is clearing out the overworld for all the equipment. Look everywhere very carefully on the world map. In the sea, behind rocks, then work your way to the chests that you saw. This is a process, but it’s not as hard as it sounds! After this, you’ll have the platinum!

This is for reaching level 10. This will come naturally as you progress through the game.

This is for reaching level 50. You’ll get this while working through the story.

This is for reaching level 99. This will come as you finish the story AND all the side quests. There’s no reason to grind levels in this game. But enemies drop EXP when they’re killed. You have to collect the little blue balls to get the EXP.

After clearing 8 dungeons, this trophy will be all yours. This will come naturally as you finish all the dungeons in the game. Check the

This will come as you clear all the dungeons. As you only need to do 38 for this trophy. Check the

This is for clearing all 73 dungeons in the game. A dungeon is considered “cleared” when you open all the chests. You know you missed a chest when there’s a little diamond icon outside of the cave, or shown on the world map view. There is a dungeon in the game called “Lonely Cave”, where the recommended level is 200. If you equip yourself with the best mana regen equipment, and use Gravi-Ruff and Cattrap, at the max level this is easy. The enemy will bounce around and do insane damage. But when you damage the enemy, you get Mana back. Therefore you can use your spells again and again. I recommend leaving this dungeon until last. But this strategy works for a lot of high-level dungeons!

This is just for clearing 7 side quests. This will come on your journey to all 67 side quests done. Refer to the

Furriend of the People III trophy description for more details.

This one is for clearing 37 side quests. This will also come naturally as you clear all the side quests. Check the

Furriend of the People III  trophy description for more details.

This is one of the biggest trophies of the game. After you clear the “The Purrsecutor” main quest, side quests start appearing. On the world map, they appear as blue symbols with white exclamation marks. They’re mostly all just fetch quests or kill related quests. As you progress the story, more unlock. So it’s wise to keep checking the map every so often to see what you may have missed. You have to beat the story to finish all the side quests though. As a few only open up afterward. After you clear out all 67, the trophy unlocks!

We recommend using the mission flow on the Cat Quest wiki

This is easy. All you have to do is beat the story. When you don’t have a side quest active, the game always shows you your next objective. You have to be around level 80 for the last boss though. So always do side quests if you see them.

This will come while attaining all 12 spells. Refer to

This will come while attaining all 12 spells. Refer to

For this, you have to attain all 12 spells in the game! The spells are acquired by interacting with magical stones in the world with a symbol on them that looks like the symbol on the back of the Characters’ heads. I believe all the stones give out the spells in certain orders, so I’m just gonna list the stone locations:

1 – In the tutorial. Can’t be missed. It gives you two spells.2 – In the Cave Grotto, which is located in Mew Fields. The recommended level for this dungeon is level 6. But you can go in at level 3 or 4 and be just fine.3 – On the South Island where you fight the invulnerable boss, during “The Purrsecutor” quest, early in the story. On the North-East peninsula.4 – This is in the Whisk Cove dungeon, located on the EastPaw Beach. The recommended level for this is level 20! It’s in the top right of the dungeon!5 – Once you reach the Lupus Kingdom, the first town you come to is called Pound Town. Just north of there is the rock.6 – In Far-Fetched Cave, in the Lupus Kingdom. If you go to the northeast corner, you’ll find the Excavation Site. If you follow the walls to the left, to the seaside, you’ll find this cave. In the cave, take the top-left path to find this stone.7 – In the Tomb Of The Follower dungeon, the stone you want is right in the dead center. This dungeon is located on the west side of the Lupus Kingdom and it’s recommended to be level 55. So long as you’re close to that level, you’ll be fine! Or you can run in, then run out.8 – In the Lupus Kingdom, go to the Throne Of Lupus town. This is the capital of the kingdom. Once you can walk on water, go west of it, and you should see land just a little north as you start going out to sea. This rock is on that island.9 – Once you can walk on water, go to Twin Towns in the Car Kingdom. Then just north from the, and a bit to the east, is the stone on a little island. Interact with it for the spell.10 – Once you’re around level 100, go to Cactus Cave, which is in the Lupus Kingdom, just north of The Pawasis. Once you kill the giant Cactus Queen, you can interact with this stone.11 – In Barkara Desert, in the Lupus Kingdom, there is a giant skull called “The Banished”. It’s along the north coastline. Just to the right of it, is this stone.

Check out the Cat Quest wiki for more info on them

This is for getting 34 pieces of equipment! This will come naturally on your way to getting all equipment. Check the

This is for getting 67 pieces of equipment. Just like the last, this will come naturally on your way to all the equipment. Check the

This is one of the longest trophies. You have to get all the 101 pieces of equipment. Not only is equipment in chests in the dungeons. But it’s also scattered around the world in chests. Some in regular, some in gold. This is something that takes, combing the world to get. Now, for the Golden Chests, you need a golden key. To get that key, you have to go to the Hidden Cave, which is on the East side of the Car Kingdom. The recommended level is 99. After you get it, you have access to everything. There are a few dungeons with Gold chests only. But other than those 1 or 2, the chests are all in the open world. If you’ve cleared all the dungeons, and are missing some equipment, check the overworld. You have missed a chest there.

There are 4 types, check out the cat quest wiki for more info on them:

This will come naturally, as you progress through the story, as it’s story related!

This is story related and will pop once you got to the Cat Kingdom! When you have completed the tutorial dungeon for the first quest you will get it.

This will come naturally as you progress through the story and side quests. Royal Arts are the special abilities you get, like water walking and such. So there is absolutely no way to miss this.