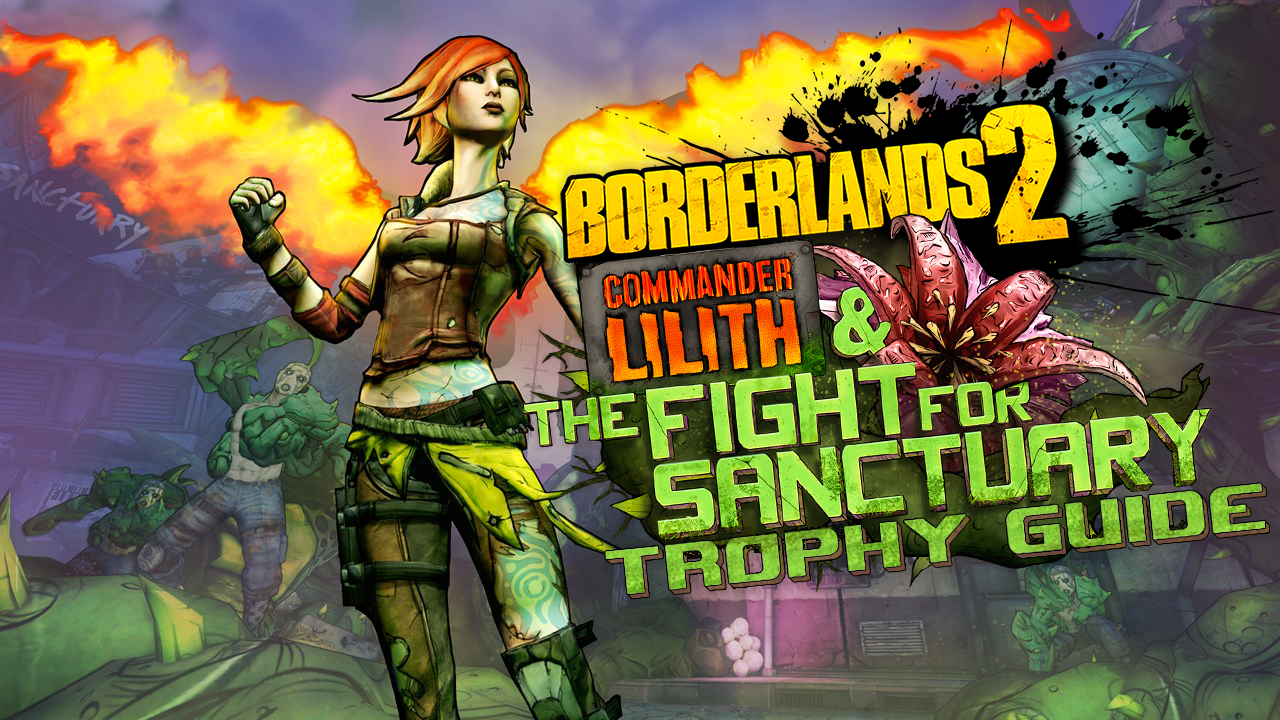 Welcome to Borderlands 2 Captain Lilith and the fight for sanctuary DLC Trophy Guide!

Over 6 years ago Borderlands 2 was released, we amazingly get a new chapter to the story, with some new shiny trophies! Grab your loot, Vault Hunter. We’ve got some trophies to hunt and bandits to kill.

Stage 1: Complete the Story Missions (While Getting the Missable Trophy)

Play through the story of the DLC and collect the missable

Play through the story of the DLC and collect the missable

In this stage, you’ll focus on completing the DLC’s Main Story missions, which are (in order):

During this stage, you’ll complete 2 different Side-Missions, which are:

The first mission is very short and easy. The second one is rather difficult (depending on character level and if you’re on Ultra Vault Hunter Mode or not). More info for each trophy is located in their specific guides.

In this final stage, you’ll focus on repeating the last Boss fights, which are:

By beating these bosses you’ll obtain the 7 Effervescent-Quality Gear needed for the trophy (4 Weapons, 1 Grenade Mod, 1 Shield and 1 Relic).

Once you start the DLC you’ll enter a cutscene. During the cutscene, Lilith and the rest of the crimson raiders are discussing what they’ll do with the vault key found at the end of the Main Story of Borderlands 2. Then out of nowhere, Sanctuary gets attacked by “Hector’s New Pandora Army” You’ll have to fight them off. After all the enemies are defeated Lilith will teleport you out of Sanctuary to a new location called “Backburner”

In Backburner, you’ll fight through 3 waves of infected enemies in order to find a new camp. Once you find the camp you’ll meet Vaughn (The same Vaughn from Tales from the Borderlands) He explains to you that you must put up the firewall by activating it. There are 3 points to activate. All points will be marked on your map and are very easy to find. Once you activate all 3 points, you’ll have to return to Vaughn who will get attacked by some of the infected. Fight them off and then turn in the mission for your trophy.

Missable Warning: This is an optional objective and can be missed.

During the mission “Shooting the Moon” Tiny Tina asks you to pick up some items to build a missile to do the following:

blow up the doors to the Dahl Mines. In order for you to reach the scientist “Cassius” who has an antidote for the poisonous gas infecting Pandora.

When the missile is ready to be armed Tiny Tina will say “You can now ARM THE MISSILE, or you could let me do it, it’s up to you, you know do what you want.” At this point, you’ll have an optional objective “let Tiny Tina arm the missile” which is what will unlock the trophy. Instead of interacting with the launch button, simply talk to Tiny Tina with

and She’ll say “Really you’ll let me do it? I thought you were a raisin but you’re a chocolate chip” the trophy will pop in the middle of her sentence.

Once you finish the main story of the Captain Lilith DLC You’ll find Sir Hammerlock next to Moxxi’s new bar. He will give you the side quest “A Most Cacophonous Lure”

You’ll have to travel to “The Burrows” and then to the “Writhing Deep” There you will take an elevator to an area where you’ll have to deposit 20 Eridium. Then Press the button in the middle of the table and go back to the elevator. You’ll drop down and then be able to fight “Haderax The Invincible”. Haderax is a Giant Sandworm. On normal mode he will be level 40, So use your best gear and avoid his attacks. If you are level 50 or above and playing on normal mode. You won’t have to worry about dying to Haderax as you should out level him and have the sufficient gear to survive and kill him quickly. The best strategy to kill this boss is to aim for his weak point which is on the back of his head. This boss also regenerates health very quickly when it goes inside the walls/under the ground. Shooting the white spot on the top of its head then shooting inside the mouth when it opens stops its healing.

When Haderax is defeated. 4 Dahl Loot Chests will spawn on the rocks in the center of the arena. In one of these chests, there will be a Rainbow Rarity Shield called “Easy Mode” This is needed for the

Missable Warning: This is an optional objective and can be missed as the boss doesn’t respawn when the quest is complete.

After the mission “Shooting the Moon” is completed near the Dahl Mine. On your map, you can find a side quest from Claptrap called “Claptocurrency” In this mission Claptrap will send you to find and mine some Crystals called “BECHO Wafers” They are crystals that glow Green and are very easy to spot in the dark mines. You can mine them by pressing

While mining, you will get an optional objective to “Destroy the Dark Web” which is a literal creature called “The Dark Web” at the top of this area that you will need to kill. This creature is a Spider-Ant, about the size of a Spider-Ant King, but colored completely black. You need to kill this creature to unlock the trophy, otherwise, it will make this trophy missable.

This trophy is similar to the

Decked Out in the base game. You have to fill every slot in your character loadout with the gear of a specific Rarity (excluding the class mod for this trophy). In this case, it’s the newly introduced ‘effervescent’ quality items added in with this DLC pack. These items have a distinct Rainbow color and are hard to miss, but they are also hard to find. However, there is some good news, there are some consistent spots that can help to reduce the time this trophy will take. Here are the easiest spots to find some of these items.

Though the Grenade mod, Relic, and Shield can be farmed from specific Boss/Mini-Bosses. Rainbow Guns mostly don’t have specific drop rates or enemies to farm. So once you have one, you can use an in-game exploit to duplicate the gun.

This trophy is earned after Turning In the very last DLC Story Mission, named “Paradise Found”.

Once you collect the Antidote from Cassius. You’ll be able to travel to the Basement of Marcus’s gun shop. You’ll have to fight your way through Infected enemies and Hector’s New Pandora Army until you reach Hector who has used the poisonous gas to infect himself and become one with the city of Sanctuary by growing into the plantation all around. You will then fight him like a normal boss type enemies. Once you bring his health bar to 0 he will appear to die but come back to life, Once you attempt to take back the Vault Key. Afterward, Lilith will ask you to go grab a bunch of Eridium from Crazy Eral’s old shop and give it to her so she can power up. You’ll have to fight through some soldiers in order to get it. Once you give Lilith the Eridium You’ve successfully finished the Story of Captain Lilith and The Fight For Sanctuary.