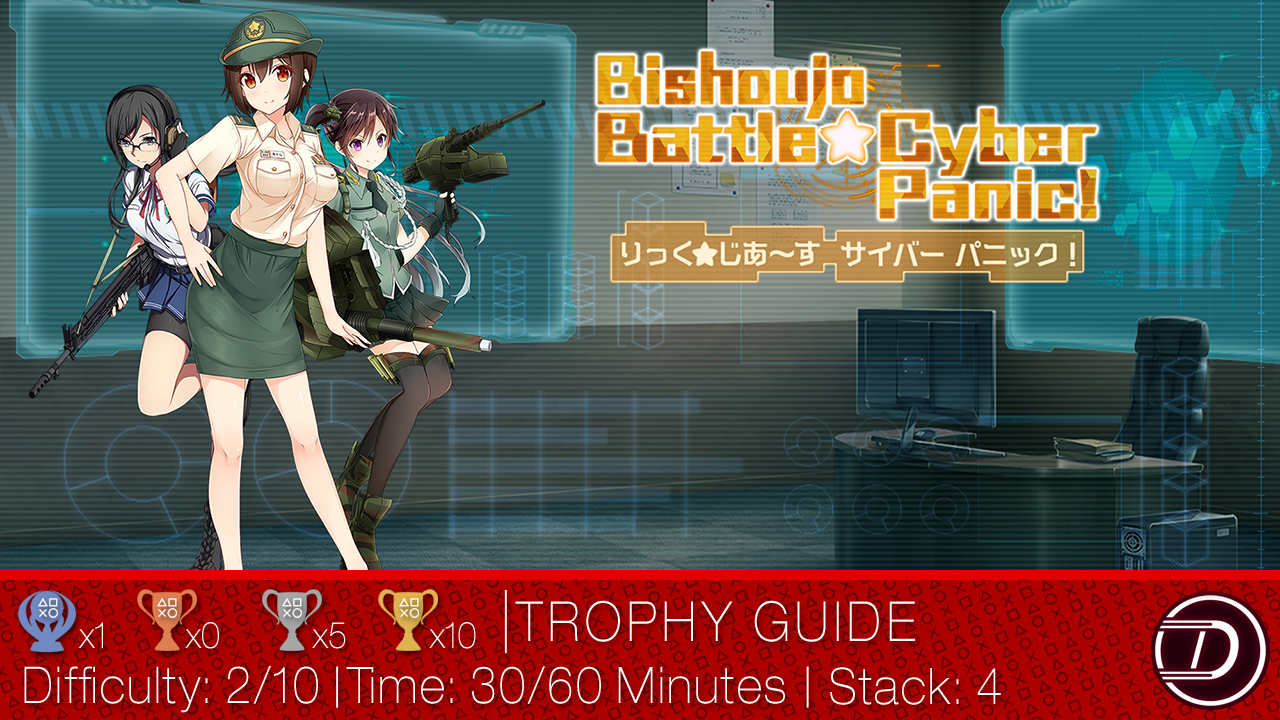 Welcome to the Bishoujo Battle Cyber Panic! Trophy Guide!
Welcome to another quick platinum! Where you uncover the picture of the anime girl for easy trophies, while avoiding all the deadly obstacles!

Step 1: Beat All 50 Levels
Hooray! The one and only needed step. There’s no other trophies, other than beating the 50 levels in the game, and you can’t skip levels. So you are unfortunately forced to do it all! Before you start, make sure you go to the options menu and set the difficulty to “Easy”. So after this step, you will have the platinum! Credits to EssTee11 for the video here!

There are a few things that may help you in the game. Or at least make it easier than it already is. This is for beating level 1. In this level, there’s only one spinning star enemy to avoid!

When you beat level 2, you unlock this trophy. This level has two spinning star enemies to avoid!

You get this trophy once you beat level 3! In this level there are 3 spinning star enemies to avoid!

Getting this trophy requires you to beat level 5. Now this is where it starts getting crazy. The spinning start enemy is faster, and there are now two squid enemies with erratic movements.

In order to get this trophy, you have to beat level 7! In this level, there is one spinning star, a squid enemy, and a bomb that follows you when you start drawing a line!

To get this trophy, you need to beat level 10. This level has two spinning stars, one squid enemy and three bombs! So start uncovering tiny pieces of the picture at a time!

You get this trophy once you beat level 12! This level has one spider enemy, one bomb enemy, two squids, and two spinning stars in it to avoid!

Getting this trophy requires you to beat level 15! In this level, you have a spider, a bomb, two spinning stars, and an enemy that sits still and shoots at you! If projectiles hit your line, you die!

This trophy is unlocked once you beat level 20. This level has a spider, three bombs that chase you, and three shooters that sit in the middle!

You get this once you beat level 25. In this level, you have two bombs that chase you, and three moving squid like enemies to avoid!

After you beat level 30, this trophy unlocks. This level has a lot of things to avoid. You have two spiders, two bombs that chase you, two squid like enemies, and a shooter that sits at the top of the picture!

This trophy requires you to beat level 35! In this level there is one spider, one shooter at the top of the picture, and four bombs that chase you around once you start your lines!

In order to get this trophy, you need to beat level 45. There aren’t many enemies in this level! There is one spider, one moving creature that also shoots at you, two fast moving stars, and two stationary shooters, with one being on each side of the picture!

To get this trophy, you have to beat level 50. Now for the last level, there is literally one of every enemy type in the game!