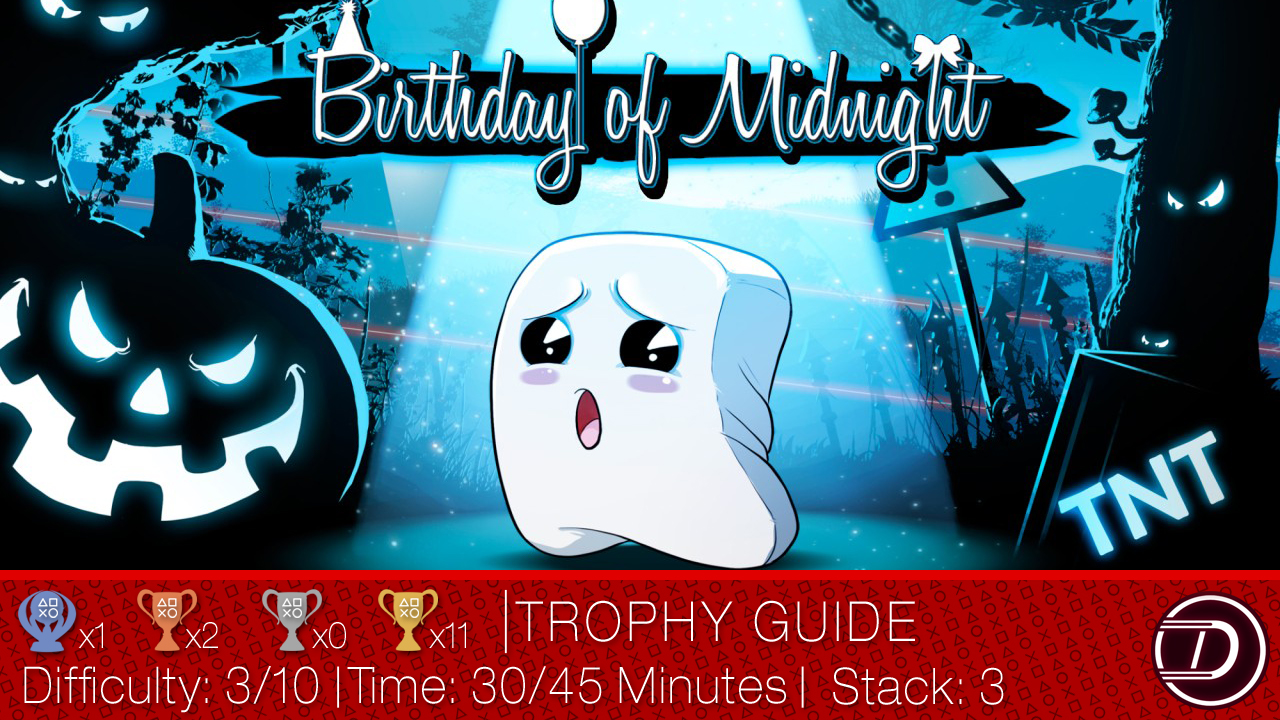 Welcome to the Birthday of Midnight Trophy Guide!
This game is the third one of the Midnight saga. Help him to reach again his birthday party by completing 72 levels!
This game is developed by Petite Games and published on consoles by Ratalaika Games.

Step 1: Reach Level 50
During this step, you will for sure get the platinum in a single journey while reaching level 50.
Most of the trophies are story related, others needs a little bit more of attention as you have to die on specific obstacles and hit specific objects:

Also, pay attention that you need to complete a level with 3 stars for the

If you have taken in consideration the previous list, you will have all the trophies and a new shiny platinum after completin level 50 of the game.

Stars are the rating of every level and they are given according to the total of throws you have done to complete the level.
Each level has its own number of minimum requirements of throws and you need to accomplish that to obtain a 3 stars rating.
For example, the first level needs to be completed in less than 1 throw to obtain 3 stars.

Fire can be found from level 26. To get this trophy, simply die on it.

This trophy can be earned from level 2.
To exit the level boundaries you need to make a throw that goes where there aren’t black rocks on the four sides of the screen. You will die but you will get the trophy.

TNT boxes can be found from level 2. Simply hit one of them to get the trophy.

Scary pumpkins are the Halloween Jack o’-Lanterns and they can be found from the beginning of the game in the first level. To get the trophy, simply hit one of them.

The first time you need to destroy a bridge is on level 4. You will need to hit a lever on the right side of the screen to destroy it and be able to reach the end of this level.

You can begin to find the boxes you can Dematerialize from level 5. You can recognize them from the Gear symbol they have and you just need to hit one of them to get this trophy.
However, you are obliged to get this trophy on level 19 as you need to sit on some of these crates to reach the exit of the level.

You can teleport from level 9 of the game by simply falling into the orange hole. You will exit from the light blue one.

You can invert gravity by hitting a lever from level 14. Once you have hit the lever, you will get this trophy.

The first level with a key is level 16. Once you pick it up, you will unlock the locked path, and this trophy as well.

This trophy will pop after reaching and completing level 15 of the game.

This trophy will pop after reaching and completing level 25 of the game.

This trophy will pop after reaching and completing level 50 of the game. This game has 72 levels in total but you just need to reach this level to get your probably last trophy.