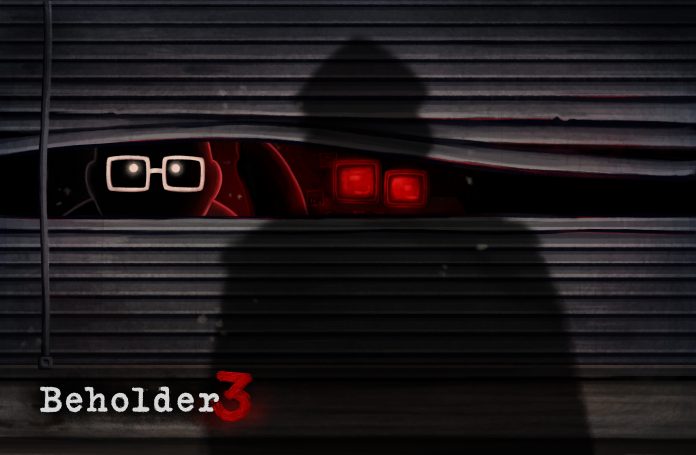 Alawar Premium and Paintbucket Games are proud to announce Beholder 3, is officially set to launch on Steam, on March 3, 2022, selling at $14.99 USD, Beholder 3 will be a throwback to the point-and-click gameplay of the original Beholder game.

“We had played the Beholder games back when they came out and loved them for telling stories of human tragedies in an inhumane system in an entertaining and clever way. So naturally, when given the opportunity to develop Beholder 3, we felt extremely honored and excited.” – Jörg Friedrich, CEO at Paintbucket Games

“As a landlord installed by the state, you’ll eavesdrop on your neighbors, bust into their apartments to plant listening devices and rifle through their stuff, and generally be an all-around rat—unless you have the stones to stand up to the system.” – PC Gamer

The original Beholder game was released in November 2016, and was a quick success with the gaming community, winning a spot on Metacritic’s 100 Most Talked About Games of 2016. It was also awarded IGN Russia’s Best Adventure Game of 2016, one of 8 finalists of GDC’s Best in Play 2017, and was recognized in numerous categories at Moscow’s DevGamm Awards. Beholder 2 launched in 2018 and fans continued to enjoy the thrills and chills inside Beholder’s twisted Dystopian Universe. Together with Paintbucket Games, Alawar Premium intends to deliver the same award-winning experience to players.

What awaits you with Beholder 3?! You are Frank Schwarz, a husband, and father who lost his cushy office job at the Ministry after someone set him up. The only way to avoid jail time was to make a deal with a high-ranking security officer. When the high-ranking security officer saves you from prison, you end up a pawn in her schemes. Now you must eliminate anyone standing in the way of her secret plans and try to get your life back while working two jobs. No tenant, employee, or superior is safe from your spying. A totalitarian state that controls everything and everyone through oppressive laws, total surveillance, and intimidation.

Can you get your old life back, or even something better?
Will you fight for change and truth or uphold the status quo?
Who are you willing to sacrifice to get what you want?