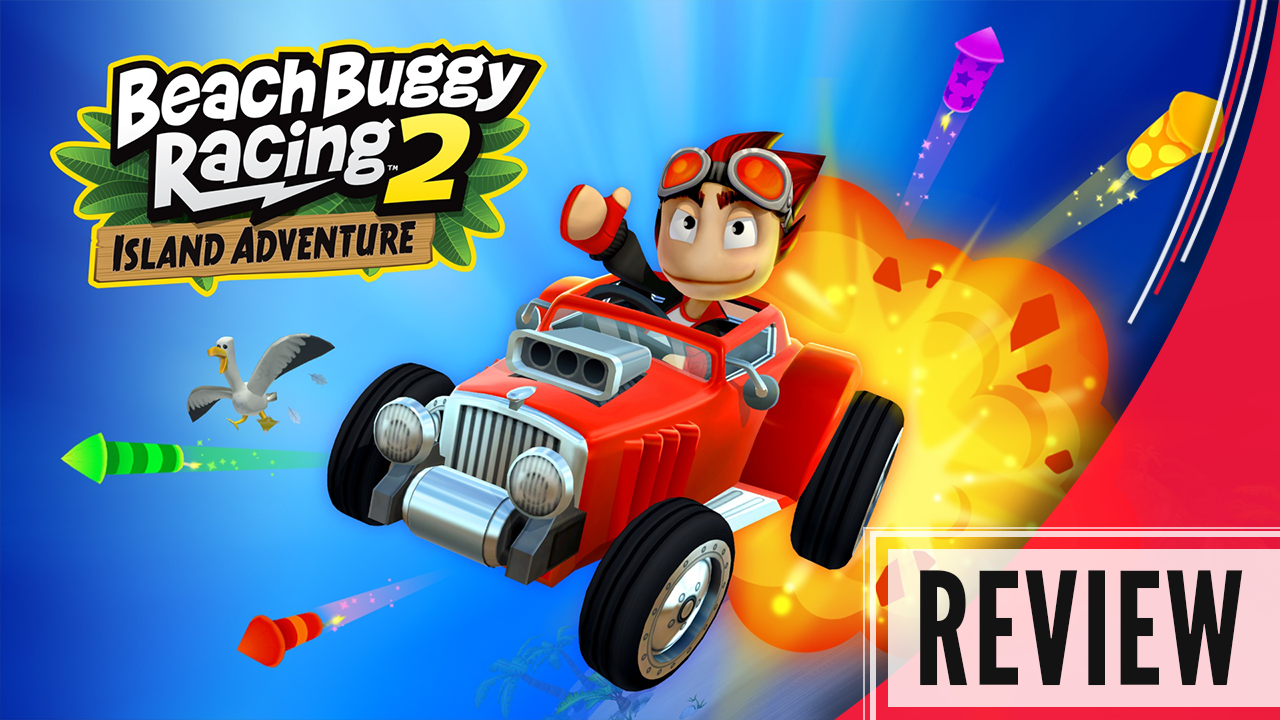 Beach Buggy Racing 2: Island Adventure was developed by Vector Unit and was first made available in 2018, and was later ported to consoles in 2021. It’s a fun kart racer with plenty of explosions!

*Disclaimer: This game was acquired with a code, given by the developers. But my thoughts and feelings are entirely my own, and not encouraged by anything at all. Enjoy the read!

Now normally, we’d talk about the story of the game first, but in this game, there is no story. So it’s hard to talk about it. But it’s a kart racer, who needs a story right? The single player mode is called “Adventure Mode” and the point is, you’ve been invited to an island of the best racers, to see how good you really are. The way the level selection works is kind of like Super Mario Bros 3. Or Super Mario World, where you get to move around a little overmap, and decide what event you want to take on. There’s not only just races to play either. There’s quite a few game modes. There is of course your standard race. Then you have time trials, so seeing how fast you can get through a course. Then a game mode called Firework Fury, that’s kind of like a time trial, except there’s things of fireworks placed around the track that you have to dodge, all while drifting. It really helps you practice your handling of the car, believe it or not. Then there’s Drift Attack, where you have to drift while in a certain area to get points. Then last but not least, Last Car Standing. Where every 15 seconds, a car gets eliminated from the race! All these other game modes really help mix up the events in the Adventure Mode, considering there’s 149 levels to get through! 149! As you work your way through, you unlock more cars, and new racers to use in Adventure Mode, and new items! Items are locked behind star gates, and you get stars for finishing an event in 1st, 2nd, or 3rd! So if you want to be able to use those heat seeking rockets, better learn to come first! Throughout the Adventure Mode, you also get upgrades for your car’s! So you start off slow, but by the end, you’re speeding along!

The racing itself is fast, frenetic, fun kart racing action. The game itself feels really good to play. It might even be the best damn Kart Racer on the system. Even beating out the first one, as it feels way more refined! You get a mix of old maps, and new maps too. So when I was racing on the old tracks, I knew where the shortcuts were, and it felt amazing to zip through them with the muscle memory I had. The new maps are great too! One has you racing through a medieval town, where you end up going through a castle, then dodging a fire breathing dragon! It was easily my most favourite map of the new ones that were introduced in this game.

Then there’s the items. A whole smorgasbord of items to defeat your enemies with! Or lose to and then you get frustrated and throw your controller…but we won’t talk about that. The great thing about the items in this, is that all of the items feel like they have a use, even if they’re not what you want. Get a hive of bees as an item? Place it down in a tight corridor, so then when the AI drives through it, their handling is messed up and they drive into a wall. Get fake item bubbles? Use it over real ones so the AI can’t use an item they actually pick up! As I said, none of them feel useless, it’s just, how will you use them? Probably not as good as the AI! The one thing that frustrated me is when you’re caught in the pack of AI, and they just spam items, and you can’t move up or anything. Especially on higher difficulties. But it can’t always be easy.

The game also has about a dozen racers to choose from as well. Each of them have their own abilities they can use in the race too! Now unlike the items, some of these actually kind of do feel useless. You get Rez, whose ability is to use a turbo boost and leave a line of fire in his wake. If the AI hit the fire, they catch on fire and lose a lot of their speed! Then you have someone like Beach Ball Guy, who….well makes a bunch of Beach balls fly out of his kart, and if the AI hits them, they just bounce a bit into the air, and then keep driving. Of course when you use them though, no one seems to hit them. So it never felt like he was a good character to pick.

The game looks and sounds very impressive for the kind of game it is. Even when you’re zooming along at super-high speeds, the tracks are nicely decorated, and nice looking. I’m sure if you slowed down, you might find some rough textures. Unfortunately, the music is the same tunes throughout the whole game, so when I played, most of the time I had my own music running. But who doesn’t do that with racing games!

So I never really talk about this category, but considering the game doesn’t have much of a story, we’ll talk about everything outside of the Adventure Mode. This game is packed full of things to do. First off, you can do a quick race on any of the tracks in the game, and each of them have their own kind of “winning” cup to get. Then you can do every map related to all the other game modes. Time Trial, Firework Fury, Drift Attack, and Last Car Standing. So there’s a whole lot to tackle in that category alone.

Then when you think you are ready, you have about half a dozen Championship Cups to tackle. Some cups have 3 races. Others have 4. But the super challenge comes with the Ultimate Cup, that has about 23 races to do, back to back, on the hardest difficulty! Are you able to get all of them? Along the way, you can also unlock all of the cars, which there are 40 of! Want them to look cool? You can find spray paints in each race track to get new colours and decals to put on the cars. Each car also has a set of challenges to go along with it, that can earn you a coveted gold colour! Each racer also has a set of challenges for different costumes too! So even if you just play for fun, now and again, there’s always something to do!

When all is said and done, and all the challenges are done, and you’re done with the game, it’s still a perfect game to play with friends for a bit of Kart Racing action! As I said before, this is easily the best Kart Racer on console. Yes even better than Mario Kart, I don’t care, I said it! So it will stay on repeat in my house for some time to come!

Beach Buggy Racing 2 is the best Kart Racer to grace the PS4 consoles (or consoles in general) since the first one. It’s more refined and fun, and there’s greater maps, and more cars to drive! Unfortunately sometimes it feels like the game works against you on higher difficulties, but if you don’t play those difficulties, there’s no worries whatsoever! Plus, there’s enough content in this game, to keep you happy for quite some time!