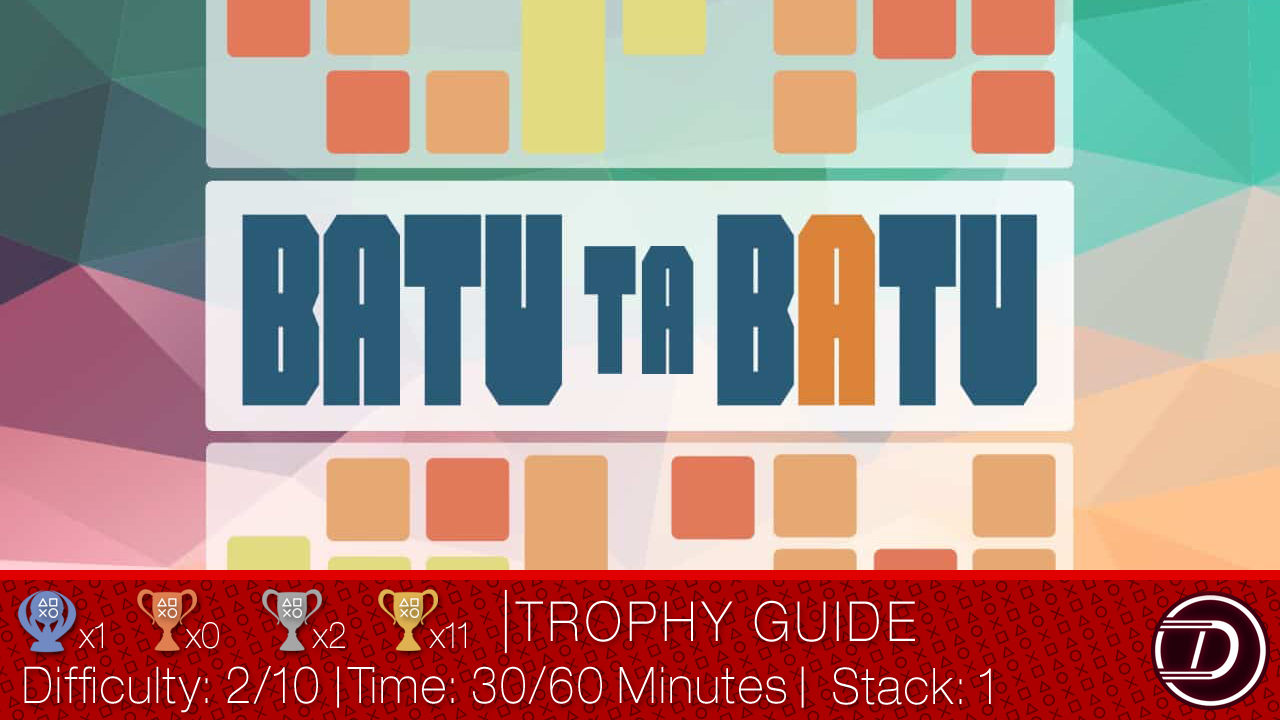 Welcome to the Batu Ta Batu Trophy Guide!
Batu Ta Batu has been brought to consoles by 2Awesome Studio and “is a colorful tile based puzzle from one up to four players. Slide the tiles and combine them with the ones of the same color and reach higher and higher levels of complexity across hundreds of levels and several game modes.“

Step 1: Reach 15000 points in Endless
During this step you will be put through the tutorial as part of the initial steps so that you can get used to the game mechanics. There is nothing to difficult about reaching this score, just bare in mind that you are against a timer, so try to make decisions on switching squares fairy quickly.
You will earn a number of the miscellaneous trophies while attempting to get this amount of points.

Step 2: Less Batus Than
Purchased for 250 coins within the Mode Select screen, the “Less Than Batus” is a game where you are trying to complete the square in a certain amount of moves.
Refer to the trophy description for this very easy trophy.

On the right track

Step 3: Multiplayer
This game is great fun within Multiplayer, as you have the ability to block your opponents moves by freezing certain squares.
You will only need to play 1 Multiplayer game to obtain both trophies.

Simply play “Endless Mode” 5 times for the trophy. You do not have to reach a set score, as you can just let the timer run down to mark the game as played.

This can be achieved in Single, or Multiplayer Mode.

Awarded for completing the tutorial as part of your first game within “Endless Mode”.

You will achieve this when you move your first 2×2 square into its respective coloured side (excluding the one during the tutorial). This was achieved by using the bomb within the highlighted square.
Ensure you have at least a 2×2 Batu grid with a bomb within and press

to blow it up. You will need 2 controllers, or a form of mobile device remote play to obtain this trophy.
You do not need to score anything in particular, so just let the timer run down or take the time to go for

Crappy delivery whist you are in Multiplayer.

Whilst playing Multiplayer you will need to move 4 2×2 squares into their corresponding colours within the same game to achieve this trophy. Moving a 2×2 square into the colour blocks certain squares on your opponents board, making it more difficult for them to move their blocks around.

This can be achieved playing with one of the players, as long as you are quick enough before the timer runs out.

Start a game of “Endless Mode” and press

every time a bomb appears in the bottom left hand corner, ensuring that you have zero bombs when the timer runs out.
Bombs will replenish naturally if you have none within your bag, so be aware of how many you have.

Achieved automatically at the end of your run for

Getting serious.
You may achieve this prior to that run, as coins are awarded at the end of games based on your performances.

You can use the coins to purchase new modes, which is needed for

On the right track.

Bombs can be acquired by moving the square that a bomb sits within to it’s corresponding colour.
You do not necessarily have to have 30 Bombs in your possession at the same time (as you can see from the screen shot below), as long as you have acquired 30 Bombs across a single game of “Endless Mode” the trophy will pop. if you cannot see an immediate move.

You are required to play 5 games for

Already a veteran, so do not worry if you cannot reach the target points on your first run.

The trophy will pop at the end of the run, so feel free to give up once you reach 15,000 points. This will unlock automatically when you end your first “Endless Mode” run.

Achieved during the “Less Batus Than” Mode, which can be purchased for 250 coins within the “Mode Select” screen that you will get at the end of a game.

In order to achieve this trophy you must complete the grid in less moves than suggested on the screen, so simply move the highlighted square as shown. You need to reach 1,000 points to move up to Level 2 and obtain this trophy.
You will get this naturally on your way to