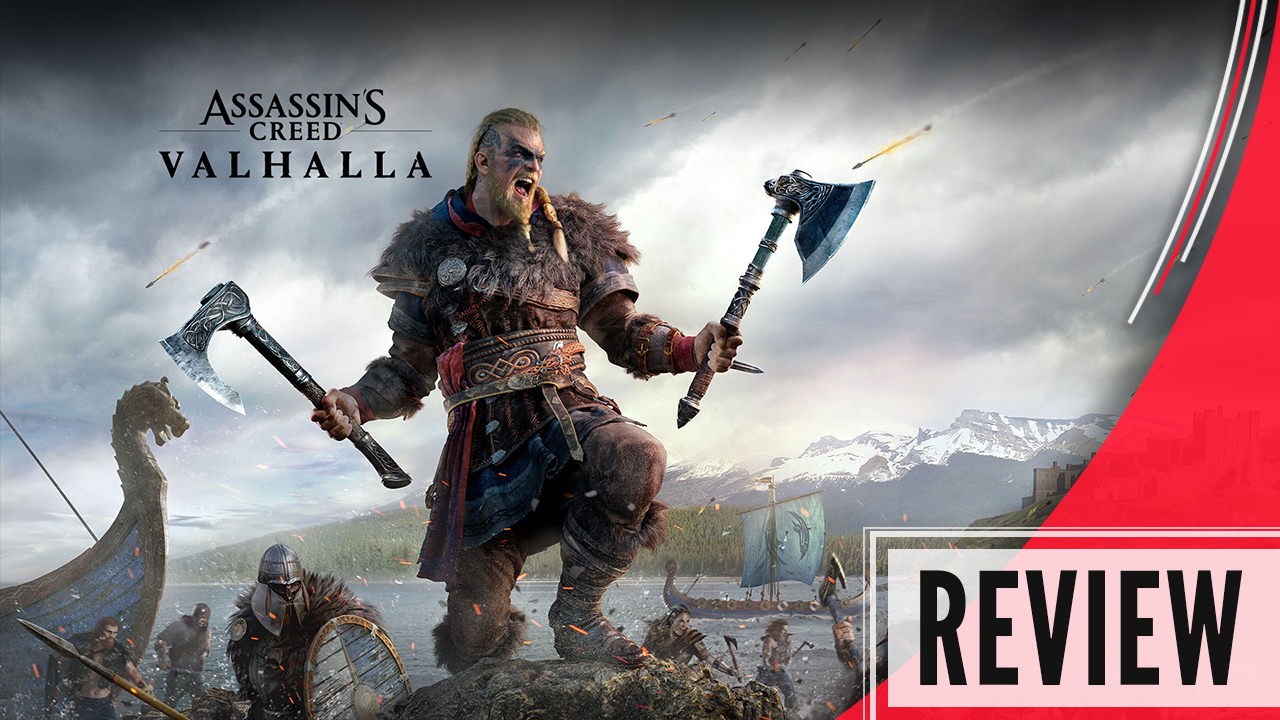 Assassin’s Creed Valhalla was a great ending to this generation and a perfect sequel to last year’s Assassin’s Creed Odyssey. It’s 2020’s entry in the Assassin’s Creed series and it’s a great game to end on with the PlayStation 4 era of gaming, both in visuals and story. The game is an open-world RPG Developed by Ubisoft Montreal and published by Ubisoft. I played about 20 hours on PS4 but then I switched to PS5 where I finished up the game in 80 more hours. I did complete the PS4 version on the PS5. This review might include some spoilers!

Unlike most Assassin’s Creed games, this one didn’t feel slow and boring. With every Assassin’s Creed game I get really bored by the start, its always so slow and it rehashes the mechanics that have stayed the same for multiple years on end. This game kinda does it but it also lets you try out a lot of things yourself and lets you learn through actual missions.

The introduction to the story is a little bit slow, the 1st piece of land you go to is a bit too big and doesn’t have too many collectibles to go around in. You start off with some cutscenes as Eivor (the main character) as a child with her backstory to her reasoning why she does what she does and why she got her nickname “The Wolf-kissed”. After that you start with the real story, your “Brother” returns and you get set on a quest to go after the person who stole the land of your clan.

This game play’s as your typical Assassin’s Creed game, it has running, stealth, glorious fights, and a bunch of collectibles to find. This time I felt like I had to think a lot more while getting the collectibles and look around a building to try and find a way to get inside. This was a nice change of phase because usually, you run in, grab the thing you need and run back out. This made it feel more rewarding because you actually had to do something to obtain what you needed.

One of the collectibles is a new thing that lets you upgrade the rarety of the gear and opened up more upgrade slots, with the upgrade slots you can make your armor stronger and your weapons more lethal. The only problem with it was that I only found out about some of these usages near the end of the game.

I did all the collectibles first before doing the story in an area, this had some positive effects but can be negative for some depending on how you look at it. From the collectibles, you gain some XP and every time the bar gets filled you gain 2 levels, after a while, this overpowered me kinda a lot to the point where I got to a level 90 area and I was already level 180. This didn’t impact it much with the story but it did make the combat super easy and most of the enemies became 1/2 hit.

The combat in the game felt great, with some weapons you just mow through them and then you get some cool mini cutscene. These cutscenes did get annoying after a while because you cant fast forward them and take up to 10 seconds, when you wanna go through something fast it’s not fun to watch the same few animations over and over again.

The world looks absolutely amazing on the PlayStation 4 version and will probably look even better on PlayStation 5. all the area’s look so realistic and the characters are so full of life, the only problem I usually have with games is how bad the hair looks and this game has that same issue for some characters, especially with some beards.

The sounds effects are so great, every time you leveled up or completed a mission you hear this effect and it’s so satisfying to hear. I heard some music but it kinda got faded to the background 95% of the time because of how focused you get playing the game. The only music I really noticed and paid attention to was the final song after you get the Master of the Order.

The world is really big and looks amazing but there are some problems with it. The whole map felt the same. There are 4 different types of landscapes: Snow, Plainlands, Swamp, and hill lands/mountains. The map is so big that most of the time I got bored with all the areas looking the same. I still loved looking at them while riding my horse but most of the time I just fast traveled as much as possible to not feel like I’ve been at the same place for the 10th time.

The game did make up for this with some amazing setpieces on the map and secrets to find. Almost every area had something that would catch the eye and that you just wanted to keep looking at. Especially the parts where the story forces you to.

I hoped Asgard and Jotunheim were gonna be a bit different but even they felt more of the same. I really hated the 1st DLC of the Atlantis story pack of Assassin’s Creed Odyssey and they took a lot of elements and put them in these areas. The big mountains were a big turn-off and made it frustrating in the beginning but after a while, I ended up loving these areas because of the mythical effect it gave off.

Ubisoft has done it again and made me wonder and ponder what is next for Assassin’s Creed with this story. This story felt kinda special because every area felt like its own little story and outcomes. During the final mission, everyone you helped comes to your aid and helps you raid the final village. There are some main characters the will not see the end of the game and it felt more impactful because you spend some time with them and got to learn why they fight, losing these people hit harder then I expect it would but it really shows that even if you win you still lose.

The modern-day story is like most of the time the bare minimum but it made my head spin 10 times and back. There were so many twists and turns in it that were not expected at all and just made me wanna sleep for a year till I can see how they will handle that. The game felt like a perfect ending to a trilogy and an introduction to a new one at the same time.

Overall is this story and how it all comes together perfectly, there are some classic assassin’s creed elements in it mixed with all the stuff I loved about the newer games.

Outside of the main story, there is a ton to do. There are over 700 collectibles, these are split into 3 main categories and a bunch of sub-categories. There are artifacts, these are things like Roman masks and Tattoo schematics and they were cool to find, the Tattoo schematics where like the Sea Shanties from Black Flag, sometimes they got kinda frustrating to get because the free-running mechanics didn’t always feel right There where also these weird cursed areas, I’m not sure what that had to do with the story but it was fun puzzling that out.

There was “Wealth” I talked about that in the gameplay bit and finally, there were the side missions called “Mysteries” they could be small quests, Flyting, a cave to explore, or some epic bosses. The bosses from these where amazing there where these badass warriors, some weird witches, and some Legendary Animals, all of the bosses had their own trait you needed to look out for, when you are overpowered the epicness of the fights are kinda left to the side a bit but still ended up being enjoying to do.

There where also some puzzle type mysteries in the form of Crains, these are stackable rocks, and Animus Anomalies, these anomalies let you play at the modern world character and do some cool parkour course to find a clip of what actually happened to the Issu world. The other two puzzle things were stones with signs on them that you needed to line up and doing some mushrooms.

After you have completed the game there are a ton of reasons to replay the game, just like a telltale game you can make different choices and see how these things have effect on the story, some are minor but there are also a few major ones that can completely change the ending of the story.

After spending 100 hours with the game i didn’t get bored for 1 second and enjoyed every minute of it. The story didnt feel long or dreadfull and there is such a big veriety of side content that you will have plenty of hours to fill in between the story if you do get bored. Overall is this game one of the best games that came out this year and was almost as good as last years Assassins Creed (a game that is my favorite game of all time). Why wont these stuttering A holes stay down??? LondonBolt The Callisto Protocol
3 3,448