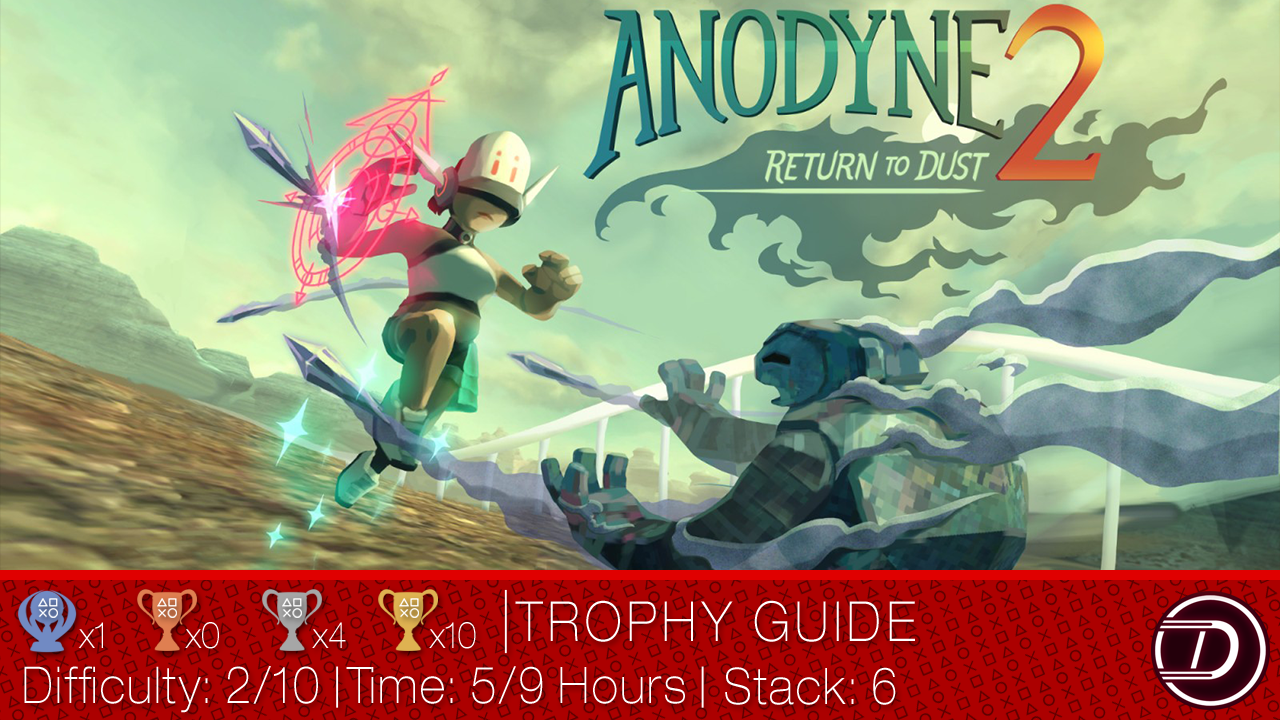 Welcome to the Anodyne 2: Return to Dust Trophy Guide!
Take on the role of Nova The Nano Cleaner, as you battle to save the world from “The Dust”, only to battle with the meaning of life! Plus it has an easy platinum!

Step 1: Collect All 24 Cards
In this step, just focus on clearing every dungeon and getting all the cards. When you’re done at Dustbound Village, you get access to MetaCoins. I recommend getting 25 so you can buy the Card Scanner from the Metacleaner. This will show you a little icon on the area of the maps if there is a card. Unfortunately it doesn’t show you WHERE in the map it is though. Also for the New Theeland and Pink Horizon dungeons, they have their own maps if you hit start. So be aware of that. After this step you’ll have most of the trophies. Also, you can go into the options menu of the game and turn on invincibility and no dialogue if you’d really like to.

Step 2: Gather 300 MetaCoins
In the off chance you haven’t collected many MetaCoins yet, now would be a good time to do this. You only need 300, and there is wayyyyy more than enough! They are only found in 3D areas, but none are found in the Spire. Once you have them all, be sure to buy everything in the store and get the. trophies related to those! After this step you’ll just need one more trophy!

Step 3: Beat the game
Now at this point, you’ll want to go finish the game by going to The Center and filling up the center with Dust. Afterwards you’ll get told of the true ending. This is done by going to Dustbound Village and starting the sequence there! After this you’ll have the platinum!

During the opening of the game, you’ll be told how to nanoscale. You’ll need to stand in front of the Yolkfolk and press Square repeatedly until the bar fills up. When you land in the dungeon, this trophy is yours!

This trophy unlocks after you beat the tutorial area of the game!

To unlock this area, you need a total of 8 cards from the dungeons. In Blue Vale, there are quite a few dungeons! In the East Blue Vale area, there are two dungeons. One is in a forest with a lake, where you hop into the water, and use your Nanoscale to break the cover on the pipe! Then go into the area. When you’re in the tree master’s dungeon, make sure you get the card from the chest! The next dungeon is located at the top of a hill. You’ll be in a big open area, and see an archway. Through this archway is the exit to Blue Vale West, and if you take the left path, you’ll find the characters for the dungeon! There’s also a card on a cliff near the exit to Blue Vale West. Follow the cliff around the left until you can jump up onto an archway then go back to the cliff for the card!

Now for Blue Vale West, there is another dungeon. The Rock monster in the giant pit has a dungeon. When you’re doing this dungeon, be sure you search it fully to get a card in a chest! Then you get a card from the chest near the generator in the car wash you need to power up by jumping to its roof!

In Blue Vale South, there is a card at the top of the giant waterfall.

After you’re done the story stuff in Dustbound Village, you’ll find yourself back at The Center. From here you can now explore The Outer Sands. First go to the Blue Vale. Now go to either Blue Vale West or South. If you’re in the West, go on the big highway, and if you’re in the south, go into the canyon to where the Spire was. From there, take either portal to enter the Outer Sands and get this trophy!

For the final boss, you have to wait for it to throw it’s shield, then hit its red spots with a circle attack. Once the bar fills, suck the shield in, hit the boss with it, then hit circle on its face. Now pick a way to go, and hit the projectiles into the boss with circle. Repeat 2 more times to win!

To get this trophy, you have to fully upgrade the center with all 24 cards. By the time you have the Outer Sands unlocked, you should have about 12 cards. There are 5 cards in Outer Sands East. Two in the apartment building dungeon, and two in the house dungeon, and one on the cliffside in a chest between the two dungeons.

In Outer Sands North, there are 4 cards. One in the weird dungeon with the DesertNPC, two in the New Theeland dungeon, and in the 3D area you’ll find an NPC talking about treasure. If you look at the rocks under him, there’s a chest.

In Outer Sands West, you’ll come across a flower-like structure with a flower in the center of a puddle. This is a dungeon and has 3 cards in it!

This is for purchasing an item from the Metashop with MetaCoins. MetaCoins are unlocked after the chapter in Dustbound Village. Once you’ve got enough MetaCoins, hit options and go to the Metaclean menu and buy something!

An Unzone is kind of like a behind the scenes spot on an area in the world. When you unlock the Metashop and MetaCoins, go to the Blue Vale area. Then the Dream Field item will appear in the Metaclean menu and can be bought with 9 MetaCoins. Once you buy it, click on it and say yes to being teleported, then you’ll get this trophy!

To get this trophy, you first have to buy the “Shareholder Meeting” items from the Metaclean store with MetaCoins. If you buy the Vale A item, then go to Blue Vale. Now take either exit and you’ll see a new interactable item in the road. Kind of looks like a giant metal joystick. Interact with one and get this trophy!

During the story, you’ll do a long section in “Dustbound Village”. After this section, you’ll get back to The Center and meet a new character, and they’ll tell you about MetaCoins. MetaCoins will have spawned in the open world now and can be picked up! So you’ll need to search everywhere. On buildings, behind buildings, some are on the underside of the elevator in the middle of Cenote City, so you need to get them and fall in the process. There are even MetaCoins scattered in Blue Vale. So search everywhere! After you get just one, this trophy is yours!

This trophy is for finding 100 MetaCoins in the world!

This trophy is for collecting 200 MetaCoins in the world!

This is for collecting 300 MetaCoins in total! You do not need them all on you at once! There are about 80 Coins in Cenote City, 100 in Blue Vale and 120+ in the Outer Sands!