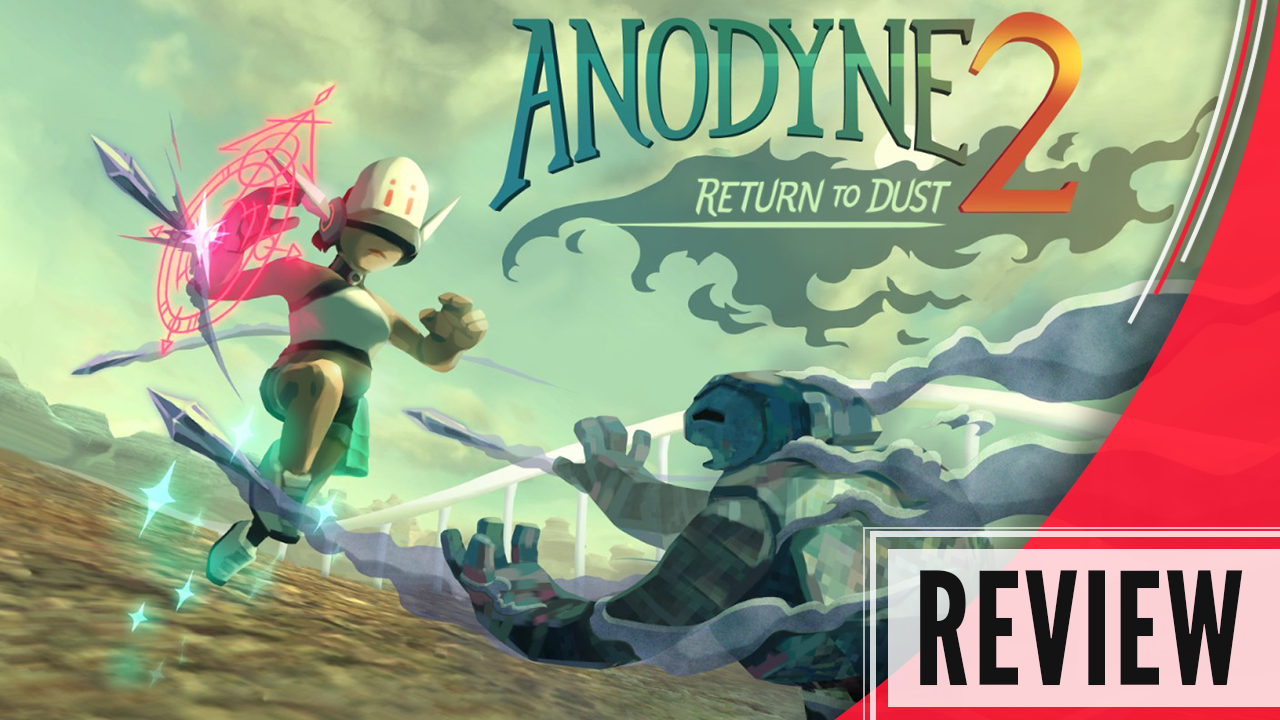 Anodyne 2 is a hybrid game, with 3D Platforming elements, and top dungeon Zelda-like dungeon crawling. It was produced by Analgesic Productions, and released for PC in 2019. It was then ported to consoles in 2021 by Ratalaika Games.

Nova is born into a world of war and conflict. Not with guns and death. But a different kind of war. Against an entity known as “The Dust”. The dust starts off as a small molecular being, and grows and transforms the person that it’s infected. Changing them with time. Slow and steady. Bringing their worst attributes to the surface. Whether it’s rage, or gluttony, or self-doubt and loathing, it’s all laid bare, until it explodes like a volcano, and the person can’t push it down any longer. That’s where Nova “The Nano Cleaner” comes in. It’s her just to go down to microscopic size and defeat the dust that’s infecting the world and its people. It’s her goal. Her purpose. The only reason why she was created.

Along the way through, something changes. She learns about life. She learns that not everything is as black and white as she once thought. The war she’s fighting is possibly going to bring more harm than good. She ends up finding out what it truly means to live and be alive and enjoy everything around her, instead of living as a robot, for one grand purpose! So she comes to a point where she battles with the meaning of life. Does she live by doing what others want her to do? By following the path others have so clearly laid out for her? Or does she live for herself, and do things her way, because she wants to. She also has to deal with the struggles of everyone around her. To help the poor person whose rage has been brought to the surface, so they’ve pushed everyone away! The elderly lady lying on her deathbed because “The Dust” has made her extremely ill. She needs to fix them! For the goal of the one true God known as “The Center”. The creator of all life! Though, is it as great and wonderful as it makes life out to be? That’s the mystery. The game really goes in-depth on the views of both sides. Of the followers of an “all-knowing being”, and about the people who have left behind that life and lived for themselves. It handles it so well, and doesn’t shy away from it at all.

On a plus side, there are also two different endings! What happens if you follow the route of the divine follower, and save the world! Or if you take the path of the nonbeliever!? Luckily you can do both because the game lets you load your save file up to before the big choice! I was hooked and so badly wanted to see both endings. Even after the game ended, I wanted more story. More depth to it all. But the game kept me begging for more!

Now the gameplay is a big mix between two genres. 3D exploration platforming and top-down Zelda. Throughout the game when you’re moving from dungeon to dungeon, you play the game from a 3D perspective. With some light platforming elements thrown in. The world is large enough that you get to transform into a car to get around, but at the same time, the world is so large and barren. There’s nothing really to look at or do besides the dungeons for the story. Eventually in the game, the 3D areas are filled up with collectibles to grab, but even then, it leaves a lot to be desired honestly.

As for the 2D top-down gameplay, that’s where the game shines. The dungeons are nicely designed, and unlike the first one, they’re more puzzle-oriented than battle-oriented. So you’ll be doing a lot of “how do I press that switch?”. Which I’m not a big fan of honestly, but this game somehow does it so well, I didn’t care in the slightest. Heck, at one point in the game, you go nanoscopic and get Atari-style graphics that kind of focus more on combat. But it’s so cool to see all the different blends of graphics going on in the game! When you first enter each dungeon, the game has a sort of rhythm minigame happening. You have projectiles shot at you, and you use the d-pad to fend them off, depending on the direction they’re coming in. There’s even a point at the game where you’re in wrestling matches and you have to do QTE events! The game has it all!

Although the game isn’t very pretty to look at visually, the sound design is flawless. Each dungeon seems to somehow have THE PERFECT chiptune to go along with the setting of the dungeon. Even the 3D areas have good music too them. But the dungeons are easily the highlight of the game. The graphics in the dungeon themselves is also pretty good as well for a top down view!

As awesome as this game is, this is where the game starts lacking a little bit. There’s no real side content in the game, or replayability per say. There is however an option in the menu to turn off dialogue in the odd chance you want to see how fast you can beat it! So that’s nice!

This game is fantastic. Yes the graphics may partially turn you away, but it’s a great follow up to a really fun hidden gem! The story is well written, the dungeons are nicely designed, and the music will make your ears so happy, you’ll wanna listen again and again and again! Don’t skip this game!