Andy Serkis commands you to purge Corruption in Warhammer 40,000: Chaos Gate – Daemonhunters, launching on PC on May 5

Players who pre-order the turn-based tactical RPG from today will receive two exclusive in-game items for their squad of Grey Knights. 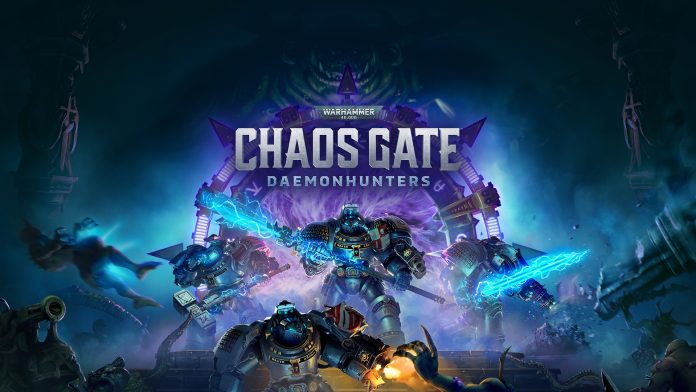 Frontier Foundry, the games label of Frontier Developments plc (AIM: FDEV, ‘Frontier’), announced today that the turn-based tactical RPG Warhammer 40,000®: Chaos Gate – Daemonhunters, in partnership with Warhammer 40,000 creator Games Workshop®, will be releasing on May 5, 2022 and is available to pre-order now on PC across Steam and the Epic Games Store. In addition, the development team at Complex Games is excited to reveal that legendary actor Andy Serkis (The Lord of the Rings, the Planet of the Apes trilogy, The Batman) will lend his vocal talents to Vardan Kai, a Grand Master and Steward of the Armoury, in the game’s campaign.

Warhammer 40,000: Chaos Gate – Daemonhunters is a cinematic turn-based tactical RPG. Players control a squad of genetically-enhanced Space Marines known as the Grey Knights in their efforts to purge the forces of Chaos and stop the spread of the Bloom, a galaxy-spanning daemonic plague. From their mobile base of operations, the Baleful Edict, players will decide which planets endure and which must fall in the Grey Knights’ efforts to suppress the thriving Bloom threat.

All players who pre-order Warhammer 40,000: Chaos Gate – Daemonhunters from Steam and the Epic Games Store will have access to two exclusive in-game items, which are powerful relics from the hallowed vaults deep within the Citadel of Titan. The ancient tome Domina Liber Daemonica is carried into battle by a hero of the Chapter during times of great need, and the words within have the power to send Daemons howling back into the warp. The centuries-old Destroyer of Crys’yllix Daemonhammer, meanwhile, was the first Nemesis Daemonhammer of its kind, famously used centuries earlier to shatter the Lord of Change Crys’yllix. Both items can be equipped to any of the player’s Grey Knights in-game.

Players gearing up to join the Grey Knights in purging the Bloom can add to their armory with the Warhammer 40,000: Chaos Gate – Daemonhunters – Castellan Champion Edition, which alongside the base game, grants players access to an exclusive character. Owners of this version will have Castellan Garran Crowe join their campaign partway through the story, with the powerful Grey Knights Champion available to fight alongside the rest of the squad thereafter. Crowe has his own unique weapon, the Black Blade of Antwyr, as well as special in-game rules. This edition also features the game’s original soundtrack, composed by Dawn of War 2 veteran Doyle W. Donehoo.

Grand Master Vardan Kai – Steward of the Armoury
A veteran of hundreds of campaigns, Grand Master Vardan Kai, voiced by Andy Serkis, will advise players from the Grey Knights’ citadel on Titan, responding to requisition requests for additional reinforcements, mastercrafted armor, and weaponry to support their campaign.

“Vardan Kai is a Grand Master, he is a very authoritarian leader, and he doesn’t suffer fools. He has a strong dislike for those he feels he can’t trust, and doesn’t show a lot of emotion, but throughout the game he’s building a ‘master and pupil’ relationship with the player. His personality will definitely keep players on their toes.”

Gameplay summary
Players will command the Grey Knights in fast-paced and brutal ground combat missions, using high-precision tactics and environmental destruction to eradicate the forces of Chaos. They must use everything at their disposal to purge the Bloom, switching up their strategies as circumstances dictate. During missions on infected planets, events known as Warp Surges can occur and summon enemy reinforcements, or make opponents even stronger.

The longer players leave a planet to wither under the influence of the Bloom, the more dangerous combat missions there become as different ‘strains’ of the plague take hold. Enemies and the environment will mutate over the course of the campaign as a result of the Bloom’s spread, keeping commanders on high alert with unexpected challenges. Players will forge their champions to face down Nurgle’s corruption, assembling their squad from an array of different classes, each with their own skill trees and specializations in battle. With customizable equipment, upgrades and armor, players can build their personalized dream team of Battle-Brothers.

The Grey Knights will contend with a wide variety of Nurgle’s minions, from vile Plaguebearers to the towering Greater Daemons and Daemon Princes. They’ll eventually face the ultimate challenge in the Prince of Decay and Primarch of the Death Guard himself: Mortarion. Along the way, players will experience a rich Warhammer 40,000 storyline brought to life by New York Times bestselling Black Library author Aaron Dembski-Bowden.