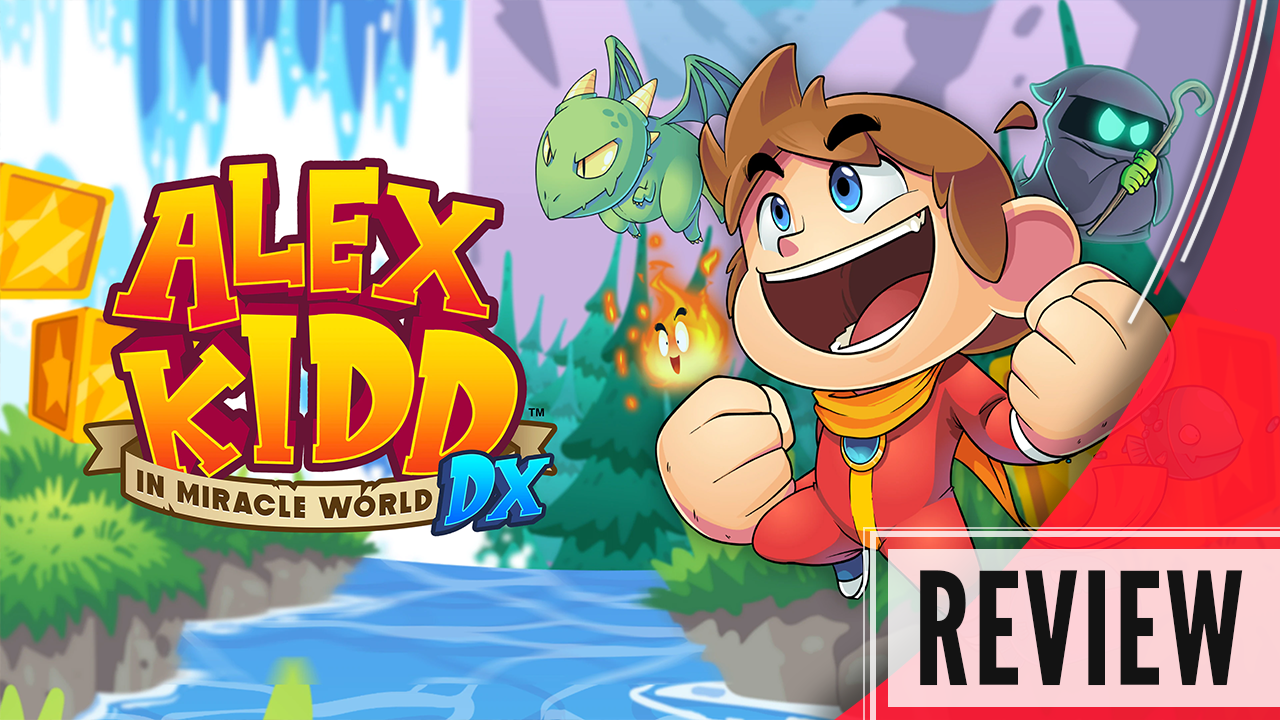 Alex Kidd in Miracle World DX was developed by Merge Games. It was brought to consoles and PC on June 22nd, 2021.

*Disclaimer: A review code was provided by the Developers for the sake of this review. That doesn’t impact the review on the game. As my thoughts are mine, and mine alone.

Alex Kidd is back, and with a new coat of paint! You take on the role of the titular Alex, as you fight against an evil overlord called Janken The Great, who has seemed to turn the citizens of Radaxian into stone! So you travel the land as you take down his generals, and find out more about yourself and your true self!

Though because this game is a recreation of the very first one, there isn’t much story here. You can find people to talk to in some levels that give you some dialogue when you interact with them, and the bosses give you the normal “your journey ends here!” line, but other than that there isn’t much here for story. But gameplay was king in the era that this game comes from! So I guess it depends on how you view the lack of story, as good or bad! It’s just very basic is all.

The gameplay though is where the game shines. It’s fast, it’s fluid, and you get to change graphic settings at the click of a button! That’s right. You can go to old school 8-Bit graphics, or new and resigned graphics, AND music, with the tap of R2 (if you’re playing on PlayStation), and I did this for literally every level! I was so enthralled with how every level looked in its old-school design, because I never did beat the game on Sega. Though one thing I was hoping for with this redesign of the game, was the ability to have a level select on the overworld map. Instead though, once you beat a level, you get shuffled to the next. Though you do get an option in the menu to change your “diet” from a range of foods. These are the items you get to complete a level. So if you choose a hamburger, Alex is actually eating a hamburger on the map screen. I thought this was a great little touch!

Though some levels aren’t too long, some are quite challenging. As there are enemies and hazards to avoid, you will die. A lot. As this is meant to be old school, if anything touches you in the slightest, you die! Though luckily for people who will stress out about that, there is an infinite life mode! I personally had to take advantage of this on the last level, for a few reasons. There was a spot where you had to avoid green waves coming from the ceiling of a room, and you had to break bricks on a wall. To reach a brick, you had to jump, but more often than not, I’d hit the hazard and die. This was annoying, as you can only punch side to side, and you can’t just crawl under stuff.  Coupled with something the game just expects you to know, elsewhere, I died about a hundred times in the final level. So infinite lives mode was a lifesaver so I could stop restarting the level!

Though if I’m being honest, I mostly succumbed to most of my deaths because of the slippery platforming. Yes the controls are very tight, and it felt really good, but at the same time, landing on a platform, just to slide off into an enemy or a spike trap didn’t make the game feel tough. It made it feel annoying, and cheap when it happened. So many levels were restarted because of that single premise. Same with the bosses. Now bosses are fought in the traditional sense of “hit them until they die”. You have to play Rock-Paper-Scissors with them. So it’s just luck of the draw on whether you win, or die and have to restart the level if you have a game over! Luckily if you have lives, you start out just before the “fight”.

There are also a few items that you can use in the game. Some are handy, others I had no idea what they actually did. The game doesn’t give you a description of anything. So the only item I used was a ring that would drop from boxes sometimes, which gave me extra long attack range. It was awesome for some areas, but I bet other items would’ve been more useful. Or in the stores that you can find in-game, there are also no descriptions. So I bought a motorcycle power up thinking “yea, I can use this to kill a boss!”, but no, that second I left the shop, I got tossed on a bike, and pushed through the levels automatically, killing everything in my way, until I hit an unbreakable obstacle.

If you love the original Miracle World game without added levels though, once you beat the short, 2-3 hour adventure, you actually unlock THE ORIGINAL game, in its 8-Bit graphic form. Which is a nice bonus for fans. Plus you get a boss rush, but in the end, it’s just a long Rock-Paper-Scissors marathon…who wants that?

Alex Kidd In Miracle World DX is a great remake of the original game. The fact that they also let you play in 8-Bit graphics if you want is also a nice nod to old-school fans. Sure there isn’t a grandiose story, and the platforming is a slippery pain, there’s also an infinite lives mode for people who don’t want the stress of lives. Though the game ran a lot shorter than I thought it would’ve, I had a lot of fun with it, despite its shortcomings. It kept me smiling most of the time, and I couldn’t stop switching Graphics modes. If you’re a fan of old school, I definitely recommend this game. But maybe not at full price…