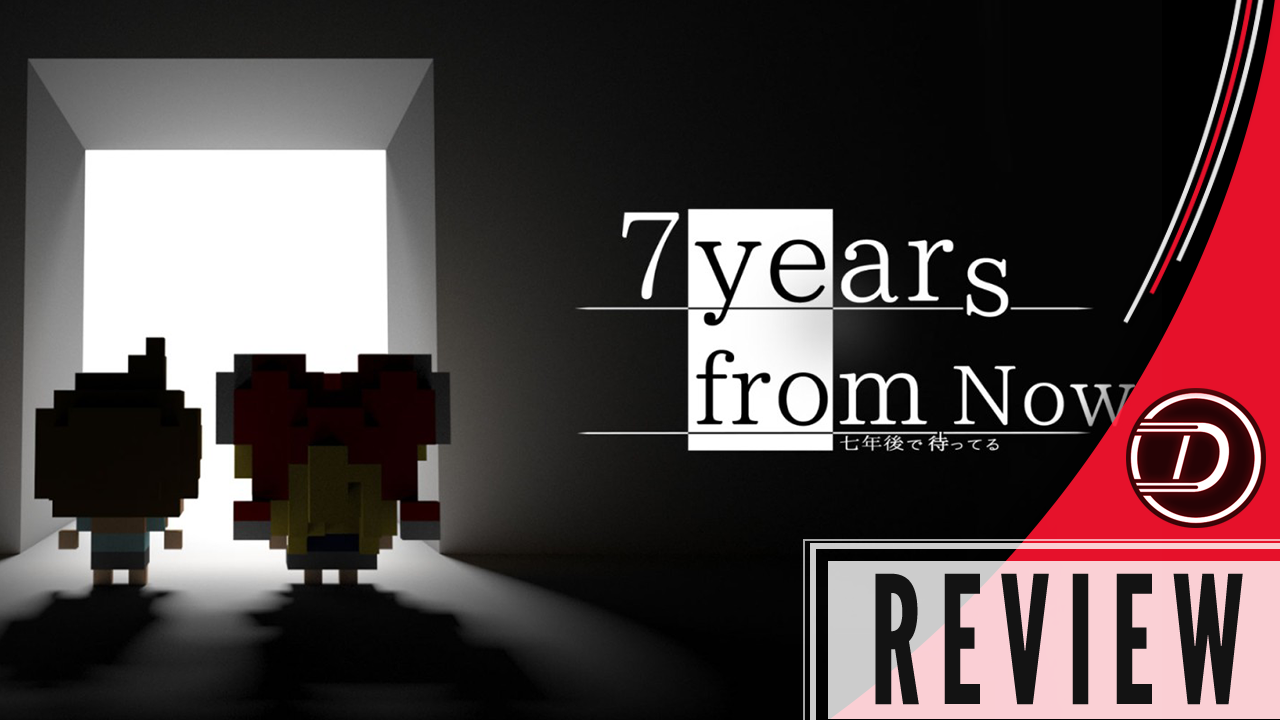 7 Years From Now is a heavy text-based story game, developed by Hiraya-Space and released to Steam in 2017. It was later ported to Switch by PQube in June 2021.

*Disclaimer: This review will have spoilers about some events and plot points in the game. Be aware if you plan on playing this game in the future.

Your name is Haruto. You find yourself back at the hospital you spent a lot of your childhood in, so you can fulfill a promise that was made 7 years ago. The one problem is that you lost your memory about anything that happened 7 years ago. So you just so happened to get a piece of memory back. Then you’re on your way to the hospital to find your friend Aoi. But you soon learn that something is wrong.

The game plays like a Visual Novel but isn’t a Visual Novel. There are a few elements where you get to walk to your next destination, which then triggers the next story beat, but other than that, there’s no gameplay at all. So for all intents and purposes, we’ll just basically consider the game a Visual Novel with a pointless walking mechanic, and pretty voxel graphics! There is a whole cast of characters to meet in the hospital, who grew up with Haruto in the hospital, but again he doesn’t remember any of them. So you get a nice sense of meeting all of these characters for the first time, and you get a sense of relationship building. You really get to know each character and feel for them all, knowing that they all have an incurable illness, which will kill them. The disease in the game is known as LMD. What causes it? Oh boy, wouldn’t you like to know!

At first, the game started to delve into Groundhog Day territory. Where you’re stuck in a time loop. So only you remember the events of the last 3 days, and every time the time loop begins, you end up having a conversation with every character about what you know, and how you want to change events. This at first is really great! There are mysteries to solve, like is the hospital just leaving LMD patients to die, so they can harvest and sell their organs on the black market? Or what was the incident 7 years ago that left you without memories, and no staff at the hospital that worked when the incident occurred?

It’s all so amazing and heart-pounding and suspenseful! Until it’s not. Earlier I said the game has a Groundhog Day feel to it. But this simple basic idea of a time loop turns into such a mess. The game tries to venture into the idea of time travel, by using a very specific flower and medicine. If you take the medicine a certain amount of times, you open weird neuro pathways in your brain, which then let you travel back in time. But only if you sniff this flower. BUT the amount of time you can go back to, all depends on how old the flower is. Is it 7 years old? Or is the flower 11 years old? The game tries to explain it all, but it makes such a mess of the explanation, I was sitting there scratching my head anytime the game tried to explain it. Trust me, it tries to explain it A LOT!

Eventually, the game goes way past the deep end. At this point, it’s at the bottom of the ocean. When you beat the game, you unlock side stories and the epilogue. The epilogue takes place during Aoi’s perspective. Who has redone the past 7 years of her life so many times, it’s crazy. It then tries to go into the theory of not being able to fight fate, and no matter how hard you try, you can’t change the timeline because things that are meant to happen, happen no matter what. It’s just a matter of who else will be involved in these events, depending on the actions taken by the parties involved. It tries to take a sort of easily explainable theory of time travel, and twist it and turn it, so it’s so convoluted, you have no idea what is happening anymore. Mind you I still found myself glued to the screen of my switch, mashing the A button, and going “wwwwhhhhhhaaaaaatttt!?”. Though the game gets too confusing, it still is such a crazy ride!

Speaking about the side stories though, these felt oddly pointless. There are just a whole slew of little bite-size side stories. They’re 5 minutes long at most, and they all focus on just one character at a time. So you have Kakaru sitting in his room talking about how his superpower is being able to tell who’s coming to his hospital room by the sound of their footsteps. Or Doctor Ichiki waiting around all day for Haruto, during a certain point of the story. You never know when these stories actually take place though. Plus at the end of the day, these stories just felt pointless and dull. I already loved these characters in the main game, and all their struggles. But I don’t care about Ichiki going “when is Haruto coming? It’s almost been all day? Kids can’t be that bad with time right?”. It just felt like random pointless filler.

Then after you’ve read all the epilogue chapters, plus you’ve read every side story for every character, you get left with one last final side story. I won’t exactly go into details about it, but at the end of the day, it felt like it made the story of the main game feel pointless because of one simple “twist”.

I applaud the devs of this game. They made a very suspenseful game, that was a heck of a page-turner. Yes, I am considering this a VN. I loved every character in the game, you learn their struggles, and you really get to feel for them. But with such a convoluted approach to time travel, it’s hard to keep up with it. Plus the side stories just felt pointless at the end of the day, but are needed for what is basically the “true ending”. At the end of the day though, I do recommend this game. Even with all of its ups and downs. But maybe keep some Tylenol around when you get into the later chapters. Or you’ll be left with a hell of a headache!