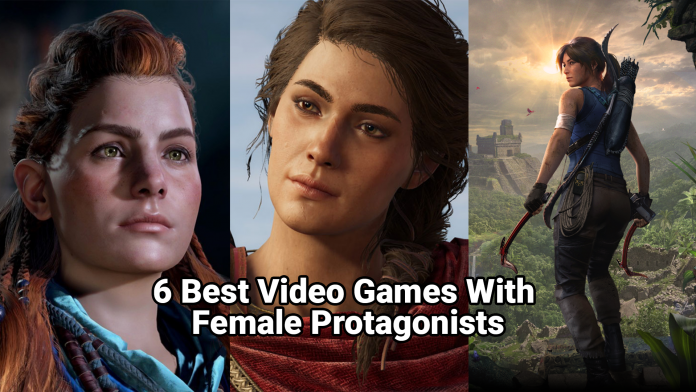 Last week was International Women’s Day, and that needs some celebrating of course! That’s why we are going to take a look at the 6 Best Video Games With Female Protagonists. Did your favorite make the list or do you have one that we didn’t mention? Let us know in the comments!

Support Girls Who Code with the Humble Heroines Bundle on Humble Bundle. You get some amazing games like Scarlet Nexus, Celeste, Gears 5, and 4 other great games for only €17.59. The bundle is available until March 23, 2022, 11 AM.*

2B from NieR: Automata is probably one of the most popular cosplays you have seen around 2018 and it still is one of the staples every cosplayer has probably done. The android from a dystopian future hacks and slashes everything that gets in her way.

Get NieR: Automata on Humble Bundle to support charity!

While the beloved Clementine doesn’t become the main playable character until the 2nd game, she has had such a massive impact in the series from the second we saw her in Telltale’s The Walking Dead. She is just a staple in the whole series.

Get The Walking Dead: The Final Season on Humble Bundle to support charity!

The classic face of girl boss energy in games can’t be anyone else than the legendary Lara Croft from the Tomb Raider series. She has been exploring the world for over 25 years and there doesn’t seem to be an end in sight with a brand new trilogy that has come out over the past generation and one of the first majorly successful video game movies.

Get Shadow of the Tomb Raider: Definitive Edition on Humble Bundle to support charity!

While Uncharted isn’t a new game, its spin-off Uncharted: Lost Legacy sure feels like a totally different game opting for a more open world vibe and 2 of the most badass woman leading the game.

Pre-Order the Uncharted Collection on Epic Games! This collection will include Uncharted: The Lost Legacy.

Another future with a female lead, in the Horizon series you play as Aloy, a girl traversing a world overtaken by beastly machines. Alow is probably one of the most recognizable female characters of this generation, not bowing down to the fake standards that most media push on girls and making her more realistic.

Horizon Forbidden West is sadly not available on PC, but the 1st game is. So why not get Horizon Zero Dawn Complete Edition on Humble Bundle.

Honorable mentions: There are plenty of other great female playable characters in games these days so here are a few games we didn’t put on the list but still deserve to be mentioned. The Playstation exclusive The Last of us 2, the indie Celeste, the zombie slayer Resident Evil 2, and the legendary Nintendo series Metroid.

*Some links may include affiliate links from Humble Bundle and Epic Games to help and support DEX.EXE and charity