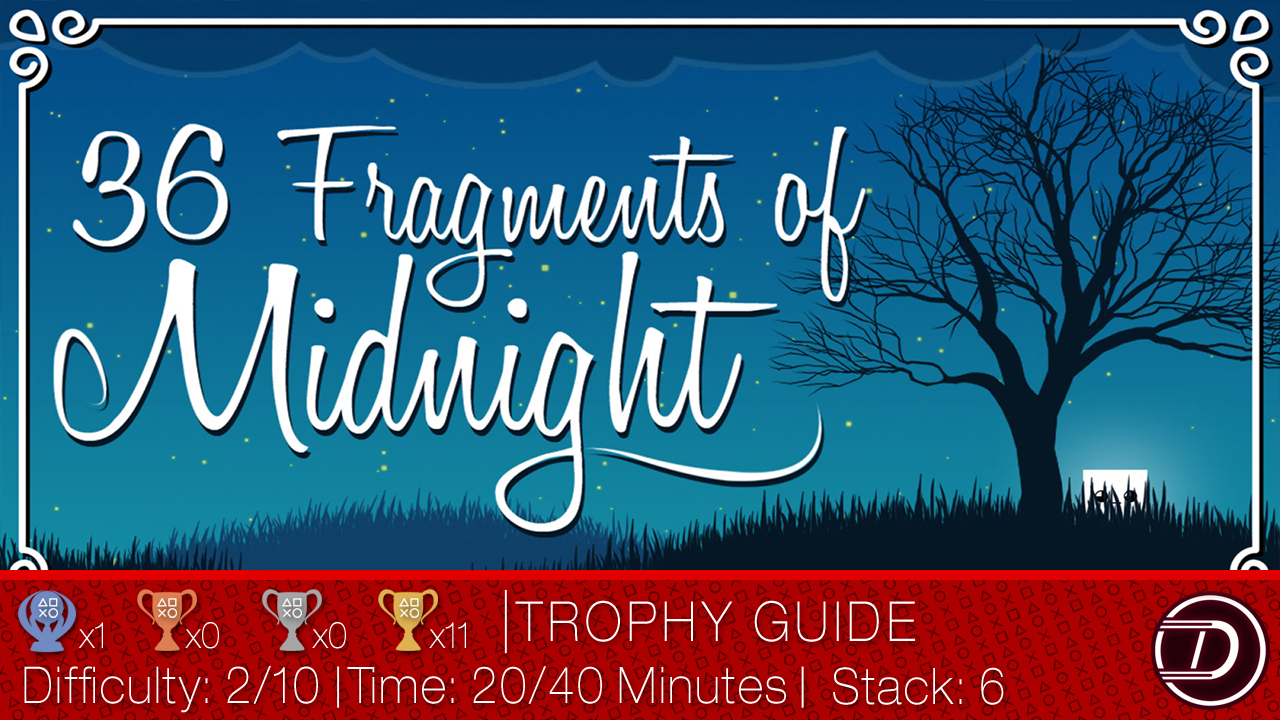 Welcome to the 36 Fragments of Midnight Trophy Guide!
Avoid deadly lasers, circular saws, and spikes to collect all the Fragments,
to get their greatest gift. Do you have what it takes to collect all?
This game is developed by Petite Games and ported on consoles by Ratalaika Games.

Step 1: Dying and Practicing
During this step, you should focus on the dying related trophies while acquiring the hang of the game.
There’s nothing more than learning how all obstacles work and how and when to jump.

You will need some practice so there’s not an effective number of playthroughs so keep getting the hang of the game and always try to improve yourself.
Keep in mind that the generation of the level is randomized every time but the obstacles are always the same even if in different places.

While practicing, you should be earning these trophies:

Only the half left

At least you tried

That IS bad luck

Step 2: Speedrun
Now that you earned a good knowledge of the game, you need to fasten yourself and try to complete the game in less than 6 minutes.
Don’t rush the obstacles tho to avoid useless deaths and frustration and memorize your starting point as you need to come back there later.

Once you have completed the speedrun you’ll be earning these trophies:

This trophy will pop after collecting all the 36 fragments that are scattered throughout the whole level of the game and taking them back to the spawning point.

To get this trophy, you need to collect 18 fragments in total that are scattered throughout the whole level of the game. Once you pick up the 18th fragment, the trophy will pop.

This trophy is probably the hardest of the entire set as you need to collect all the fragments of the game (36) and take them back to the spawning point in less than 6 minutes.

Here a couple of tips and tricks that can help you:

Even tho the levels are randomized, here a video that can be useful for you to learn how to face up all the obstacles and can help you with the platinum:

NOTE: If you end it and the timer says 6:00 minutes the trophy won’t pop.

Lasers are almost always signaled by a danger sign on the ground or on the ceiling and they will kill you if they touch you.

To get this trophy, you need to get killed by one of these lasers which appear randomly on the level.

Saws can be found randomly during a level. They can always stay in the same position or they can move vertically or horizontally.

To get this trophy, simply jump on one of them. This will cause your death but you will make this trophy pop.

Spikes can be found randomly on the floor or on the ceiling of the level.

To get this trophy, simply jump on them even tho you will die.

To make this trophy pop, simply collect just a fragment then kill yourself.

To get this trophy, simply collect all but one fragment then kill yourself.

To get this cruel trophy you will need to collect all the fragments of the game then kill yourself.

NOTE: if you want to save some time and try to collect this trophy and

The Greatest Gift together, there’s a little trick you can try:

If you were fast enough during that playthrough, you can also unlock one or both the speedrun-related trophies.

This trophy will pop after completing the game il less than 10 minutes in total.
Check

The fastest one trophy description for further details.

This trophy will pop right after you collect your first fragment in the game.
There is always a fragment on the right of the spawning point.

new-stirum94
My career of trophy hunter starts from the AC II platinum. I love videogames and I want to transmit my passion to the whole world by writing guides etc.
RELATED ARTICLES
Guides